Chomsky believes Trump is the worst criminal in human history 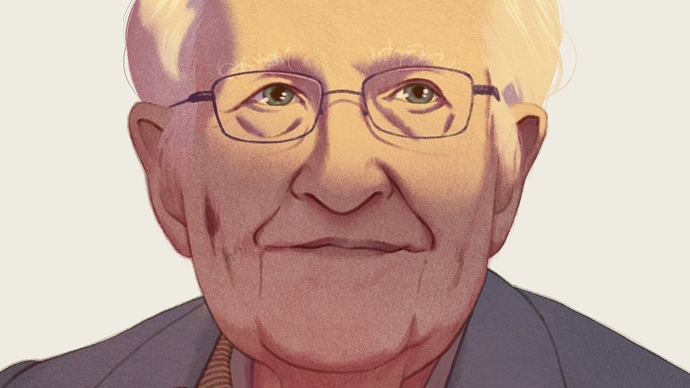 The activist and linguist has serious concerns about the future of American democracy, although, in his view, it “was never much to write home about.”

Well, I’ve always liked reading Chomsky and his ideas even though I don’t always agree with them and don’t like how his goal in life seems to be to find the negative things in everything. But after reading this interview, I started thinking that has the man gone senile? Claiming that DJT is the worst criminal in human history because he doesn’t give a ■■■■ about global warming? That’s really something. After all, we got characters like Stalin, Hitler, Pol Pot, Idi Amin, Leopold II, even Ghengis Ghan, whose track record and intentions were a tad more sinister than Trump’s.

lol what about alexander the great, he butchered entire cities to prove a point as well. what julius caesar did to gauls was basicaly genocide as well. Add napoleon bonaparte to the list. i always thought it was hilarious how people decided if a person was a tyrant or a great man. genghis khan is prolly the biggest butcher out of all of them, but id still say he is the father of us all. a great man!
but your point yes, hyperbole is what people do nowadays. everyone exaggerates and it is exhausting to hear all these platitudes.

He’s a criminal, no doubt, but not the worst in history.

History’s long. With lots of extremes.

I hear your point but I think Chomsky’s point is, global warming has the long run potential to kill or deteriorate life quality for billions, not just the millions killed by the other people you mention.

Yeah I know that’s what he means but to pin all that on one man? Come on, that’s just beyond all logic.

We’re not pulling out of the Paris Climate Agreement because of some random thing. It’s driven by Trump.

You know, one of the unfortunate aspects of generations of accepting the principal-agent problem is that nobody appears responsible for anything anymore. The customer service rep who can’t help you because, hey, what do you expect from him? The magical government machine that will just figure stuff out without voter engagement. The President with an asymmetric tendency of taking credit for successes and passing the buck on failures.

We’re not pulling out of the Paris Climate Agreement because of some random thing. It’s driven by Trump.

The first climate conference was held in 1979. Since then, climate change has only accelerated and pollution has gone through the roof. There has been a lot of talk, almost no action and taking of responsibility. Politicians have never given two shits about climate change and turning the tide on pollution. At least Trump has the balls to say that he doesn’t care, the rest just pretend that they care but their actions tell a different story. But yes, you’re right. No one is personally responsible for this disaster and at the same time we’re all responsible. Maybe Trump just sees the Paris agreements for what it really is, another Kyoto Protocol in a new wrapping that will soon be forgotten because no politician is ready to make unpopular and difficult decisions.

I bet you can figure causing the trillions of trillions of damage to the next generation and causing maybe hundreds of millions minimum deaths is more serious crime that Hitler’s if you think a little bit about long term and the scope.

No and nor did Trump unless I’m gravely mistaken.

Like I wrote earlier, politicians have done pretty much nothing to combat climate change for the past three decades. All talk no action. Pinning all these failures on Trump just because he says he doesn’t give a ■■■■ (while most other politicians claim they care but in reality do nothing about the problem) shows spectacular lack of logic and objectivity.

people adapt. natural selection is far less important for people nowadays. we arent some stupid animal. i think the last 300 years. the global temperature has changed by 3 fahrenheit. aka inconsequential. i would bet we’d colonize other planets before we destroy this one.
some fun facts. 25k years ago was the ice age where global temp was 46 fahrenheit. about 13 fahrenheit colder than today! so yea global warming is real. we are prolly the cause since hte industrial rev. but with that said who cares.

It’s amusing (but not really) to watch the logic of seemingly rational people as the backdrop of their lives, the very system they live in, gets irreparably damaged while they are completely complicit in the transformation. But they are intellectually smart people, so they comfort themselves that things are not really as bad as some think. Because, you know, the system must have provisions to correct if things get really out of hand, right? This is the same behavior as a cigarette smoker or drug addict convincing themselves they can quit whenever, but first — just one more. It is the classic illusion of control, which is actually an even stronger illusion in people with high IQs.

Go back and read about the political maneuvers performed by Mussolini at the start of Fascist Italy. It started out benign. Italians didn’t go to sleep as citizens of the Kingdom of Italy and wake up the next morning as fascists. It happened over two decades, with Mussolini methodically usurping power, destroying institutions and breaking government norms under the pretense of making Italy great again. The perverse analogy is that, you actually invite someone to dinner yourself, at your own house, and several drinks in and many hours of good conversation later do you realize, to your horror, that the main course is you.

It’s amusing (but not really) to watch the logic of seemingly rational people as the backdrop of their lives, the very system they live in, gets irreparably damaged while they are completely complicit in the transformation. But they are intellectually smart people, so they comfort themselves that things are not really as bad as some think. Because, you know, the system must have provisions to correct if things get really out of hand, right?

Well said. This applies 100% to the older people in my family (maybe even me but I’m happily ignorant of the fact

They were born in the late 40s and 50s, so their lives have been pretty much a happy and steady upward swing. So when talking about any major issue/risk that looms in the horizon (f.ex climate change, structural flaws in capitalism, even our state retirement benefit scheme which is starting to resemble a Ponzi scheme to anyone who knows to use a calculator) they are completely unable to comprehend that these risk scenarios might actually become reality. Maybe it’s because nothing crazy has happened during the lifetime so they’re biased to believe that nothing bad can happen.
But their infantile trust in the fact that the system won’t let anything get out of control is just dumbfounding.

a problem that moves at a glacial pace is not a problem. there are probably bigger problems out there that are more urgent.
a side note on social secuirty. thats not a ponzi scheme. it has reserves sure that is getting burned but you can balance it almost instantly. the question is about increasing taxes now to cover or increasing it later. social security benefits is prolly only 1 trillion, while our gdp is closer to 20 trillion so there is a ton of room!

Politicians not doing much in the past three decades is not the same as believing and saying that Climate Change is a hoax, science does not know that the temperatures are going to lower and in fact putting policies intentionally to speed up the warming.

But more importantly the Earth does not have three more decades to act. If Trump were President in 80s (actually Reagan was not a fan of environmental protection, either. One of the first things he did as president is taking solar panels off the roof of the White House) and acted the same way as today, I would not have said that he is bringing the end of human civilization.

However, today is not 1980s. Trump has literally contributed a lot to bring down the human civilization so that people can still buy their second Iphones or third Louis Vitton purses. If he stayed as the President, he is for sure to bring down civilization.

That does not mean that Biden will certainly manage to reverse the course. But it is for sure that at least he will try.

One of the dumbest answers I have ever seen.

Another one of the dumbest answers I have seen. lol

Lol well I bet you thought that when trump took office the world would end. And even with a deadly pandemic it did not. To be fair, it’s not just the libtards, it’s the conservatards as well. Bottom line, the world will not end whoever is in power. And to say that 30 years of Trump policy would end it is ridiculous.

Are you even aware that it is possible that the Earth can get into a vicious cycle to constantly warm? I don’t think you are.

Now it does not mean that this will definitely happen. But it is possible that it can happen. If it happens, they (scientists, those ridiculous people) say it can lead up to 8 degrees Celsius temperature increase on Earth in the next few hundred years which will eradicate most of species on Earth. And if we get into that cycle, not only humans have to find a way to get CO2 out of atmosphere but also create more clouds to reflect sunlight while at the same time without causing unintended consequences this may result.

Nature does not work based on your argument from incredulity.

As I said before if Trump were the president in 80s, his actions would not affect the outcome as much as his actions today. Because today, unlike 80s, we are almost running out of time.

Once we pass 2 degrees level, you basically ■■■■ in the lives of the next and next and next generation. But I don’t think you give a ■■■■ about them as long as you buy your second Iphone and third car. Right?

Have you heard anybody saying that the pandemic would bring the world to end?

Ridiculous for whom? For people who cannot grasp simple scientific facts into their small brains?

As you bet, I can also bet that you think the Earth will start cooling soon, science just does not know.

Your argument is so flawed that I don’t even know where to start. But let’s play a game of logic. Let’s assume you’re right: Trump should be considered the worst criminal in human history. Where does that leave our other contemporary leaders who have done nothing about climate change while knowing fully well that it’s happening. Macron, Xi Jinping, Obama, Younger Bush, Putin, Bolsonaro and Narenda Modi first come to my mind. Are they at least comparable to Stalin, Hitler and Co? Surely the criteria of this criminality cannot be non-linear because that would be illogical.