What do you guys think of COIN? When it IPO’d it definitely had too much heat on it (P/E was near 200) but now its finally getting closer to a price that’s viable. At $200 (currently at $228.79) it would be near 100 P/E so I was thinking at 50 PE (Price of $100) it could potentially be a good long term hold. I noticed their fees are insane (2-5% per trade) and also as prices for crypto go down the trade volume (revenue) also goes down. For now they are the best looking trading platform and the most popular. By going public they could do a lot more to make trading/sending/receiving crypto much easier. There is a lot of room for innovation as they are a pioneer in the industry but also a lot of risk. Even if they make a really great trading platform and have a lot of good ideas they wouldn’t be able to survive without growing trading volume. What do you all think? 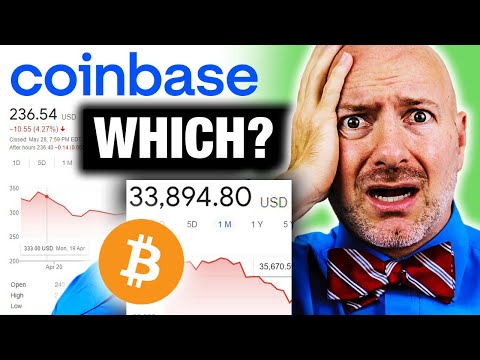 keep in mind q1 profits were literally 750m. we dont know the rest of 2021 but annualized it would be 3b. at a 50b market, thats really closer to 17x. lots of headwinds though. does crypto really have a future? will volumes continue to increase? are fees on the way down similar to commissions for traditional brokerages.

The tough part is the volatility of earnings correlated with the underlying coins. It’s like a levered exposure to coins

Not to mention competition.

apparently interactive brokers will b entering the space. RIP coinbase. lol. they’re going to drive comissions to the ground.

I agree with the guy in the video. If you’re betting on Coinbase it makes sense to instead just put your money directly on crypto because their success will directly impact Coinbase.

Is crypto here to stay or will the gov ban it? I mean, if El Salvador made it legal, why wouldn’t the world. hahaha!

well cuz el salvador is insignificant. literally their gdp is 27b vs 100 trillion for the world.

El Salvador is a good test to see if crypto will actually work in a country and it’s a good step for adoption or to realize this will never work. Who knows with crypto prices but I’ll be shocked if prices go down 95% from the peak again just because. Almost no one says it has zero value anymore like they used to and you can see more and more “sophisticated” investors are piling money into it. There are still a lot of flaws with crypto though. One example is that your entire account could be hacked and wiped out and there is nothing you can do about it. There is still a lot of work on the security side of things that needs to be done + integration technology. Either way I think it’s amazing what’s happening even if it does fail.

El Salvador is about to turn into Saint Tropez when Bitcoin reaches $100k​:rofl:

True. Their equity market is non-existent. Just like most of LATAM.

what is bitcoin used for? AKA what value does it bring
a way to send money over the internet using a decentralized digital ledger. to process a transaction, bitcoin dilutes previous bitcoin owners by rewarding miners for their effort. the amount of bitcoin awarded to miners or the amount of dilution goes down over time with the understanding that processing power will increase over time making it profitable for miners despite lower rewards in the future. lower rewards occur because it has a fixed max supply so it isnt infinitely dilutable like fiat currencies such as the usd. it doesnt expect to reach max supply until 2140.
mining rewards are halved every 4 years. if bitcoin rewards wasnt halved mid july in 2020, they would have mined 657k bitcoin for 2020.
in 2021, they’ll mine 329k bitcoin or reward $9.8b to miners or 2% of current market cap.
as of today there is still about 2.3m bitcoin left to be mined or 11% of market cap.
it processes about $28b per day or 900k bitcoin, but if we annualize that its roughly 328m bitcoin is processed annually or $9.8 trillion per year repping 18x its market cap.

now what should be bitcoin’s price
well this is where it gets funky. how much should we price it based on its value.
well we can value it based on transactions. surprisingly visa does about $8 trillion in payment volume. resulting in a market cap of $500b. it generates a net income of $15b for its services. kind of close to bitcoin market cap, and bitcoin miner rewards for profits, but keep in mind miner bitcoin rewards decline over time. so the hope is price continues to skyrocket to keep offset the lower amount mined.

now why should price continue to skyrocket?
many call bitcoin digital gold. gold’s market cap is about $10 trillion. so perhaps price should be equivalent. if thats the case then bitcoin can be worth 450k.
but why is gold priced at $10 trillion? 85% of gold usage is used as jewelry or store of value by central banks. so in terms of value, its just a shiny object people like to flex with. which i guess is similar to bitcoin minus the physical part.
but why stop at $10 trillion market cap for bitcoin. the federal reserve will very likely continue to digitally print over time. why not benchmark bitcoin to m1 money supply at $18 trillion. or continue the argument to size of stock market at 100 trillion. or the size of the amount of real estate at even higher levels. anyways it can get ridiculous. most draw the line way before that. but you can go cray with it if you consider than gold is valued at $10 trillion for some arbitrary reason despite its productive usage at only 10% of its current value. gold is a nice argument for bitcoin because besides doing nothing for the most part, it is still valued at ridiculous levels and has been so for 5000 years.

anyways the most important question, what happens when bitcoin caps at 21m bitcoin, and no longer has rewards for its miners? well then they go from a dilution model of current bitcoin owners, to outright paying them transaction fees. right now transaction fees only make up 5% of the rewards to miners. Over time this will shift to 100% where the people who need a transaction confirmed will pay for the privilege outright.

Now why is this important? in most scamcoins right now. people who build out the coin will create fictitious volume and go on a marketing spree via tiktok to convince people to buy it to drive the price and drive even more volume. now they dilute themselves, but keep in mind they could be powering the mining themselves as well. anyways the key is though as transaction costs rise to 100% of the fees then you get to its true volume. hence its true value.

anyways i think its hilarious that yall are rewarding a bunch of nerds money for solving math equations just to verify transactions.

So what you’re saying is buy the dip? Wink wink.

haha to the moon. but im friends with a few crypto millionaire miners. and what they do is they mine other cypto. then trade the crypto for bitcoin. and hodl bitcoin. they use some automated thing to figure out which crypto is the most profitable to mine.