Im still having some issues with understanding the concept of when to use the table below:

So the rule: Confidence intervals for any normally distributed random variable are:

The below question is asking for a 95% confidence interval, the Sd i used was 1.96 but in the solution in the Qbank they used the Sd from the Student’s T-Table (Degrees of freedom = 25 − 1 = 24 and thus From the student’s T table, t5/2 = 2.064). I still got the right answer because the numbers are very close to each other, but I guess what im wondering is, when do we use the above Sd and when do we refer to the tables?

Is is because this was a small sample, smaller than 30 we use the t table? Thanks for clarifying this.

yup if sample size is less than 30, you use the t-tables

its not about sample size. Its whether population variance is given or not

so when do we use these?

@gekko: As you can see in the table in p289 Schweser’s note, in case we can use z statistic, the above rule can work for constructing confident interval

Iteresting- When do we divide S.D by underoot n and when we dont ?

@ vicky: in every case we have: Sx= s/ (sqrt n) where Sx is the standard error and s is the sample deviation

I am sure you can cobble up a better summary than this but this figure may help with the format :

Sometimes we are given z table and asked to make confidence itervals at 95% and in table z=1.65 at 95%

confidence interval : looks at area under the curve on boths sides of the mean

table : looks area under the curve on one side of the mean 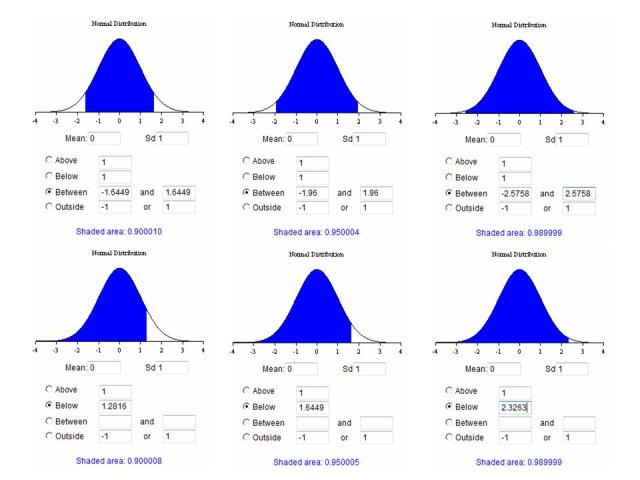 Iteresting- When do we divide S.D by underoot n and when we dont ?

I’m wondering about this too. Can someone shed some light regarding this?

Sometimes, when they ask you to create a Confidence Interval, you use mean +/- z(standard dev): example on page 255 of Schweser book 1.

The average return of a mutual fund is 10.5% per year and the standard deviation of annual returns is 18%. If reutnrs are approximately normal, what is the 95% CI for the mutual fund return next year?

However, on page 287 of Schweser book 1, they use a different formula to calculate CI, using mean +/- z(standard dev / root n):

What’s the difference between these two calculations? They are both normal distributions with known variances. This could be a dumb guess…but do we use the standard error in calculating the CI when n is actually given? Since we don’t know n for the first example for the mutual fund…?

The difference between these two calculations lies in the fact that Q1 asks you about a member of the population (mutual fund return) while Q2 asks you about a MEAN score for 36 candidates.