It’s been a year since I graduated and have a job paying 125K in NYC as a Software Engineer. The work is good and I enjoy it, but somewhat 9 to 5. I don’t mind the “ok” pay for a college grad but I find myself debating about what to do from here. Few of my more senior friends who were 2,3 years above me are making 300K+ in total comp but I feel your life is not gonna drastically change with those figures.

Sure, you get to move to a more trendy apartment/neighborhood but I feel many of these “goals” are somewhat illusionary. One reason I initially wanted to do finance was becoming a big business executive and dining with presidents and world leaders and I just don’t see that I’m my current trajectory. The best I can do with my job is to become a Staff Engineer or something at FAANG, and get paid like 700k+ which is fine, but I would be a fly on the wall still.

I know becoming the next Peter Thiel is obviously not easy and almost impossible statistically speaking but that is why I put myself through this pain of college and studying a hard major, any ideas of what to do? I know this may sound like a dumb post, but I would like another perspective on my situation and perhaps some clarity on how should I be looking at my career/life.

It is normal to struggle to adjust into adulthood and the stability of a career. In reality you did “the pain of college and studying a hard major” to make $120k on a 9-5. That’s where that sort of ticket punching gets you and that is a fortunate result given the 10’s of millions virtually indistinguishable from you from a resume and skills standpoint. If you mismanage this and find yourself out of work and career you may regain perspective there. Your goals seem a little shallow and immature to be honest with a naïve view of what that life would entail and I doubt even if you achieved them you’d find what you are looking for.

The idea that studying a “hard major” which is a bit generous somehow equates to being a world leader or billionaire is arguably the cringiest thing I’ve seen in some time. You’re miles behind the people you are imaging at this stage. They’re either working around the clock with more talent building something incredible for the sake of the build or they were born at the finish line. The fact that you settled for a 9-5 role and can’t seem to be motivated indicates you’ve already self-selected into the proper cohort, the rest is simply delusions of grandeur.

Edit: This is meant to be taken constructively as a helpful dose of realism.

lol it sounds like u have no purpose. imo just enjoy life. life is much more itneresting in your 20s than your 30s. you need to develop a hobby. for me it was chasing tail, clubbing, basketball, and dota. get yourself a good set of friends with similar interests. the minute you have that, you’ll prolly feel more fulfilled. tehres always a lot of people who’ll do better than you. when i was young, i just thought it was silly how so many saw themselves as exceptional or special. heres a munger video: 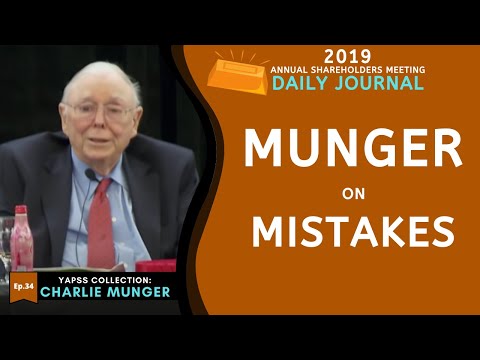 Yea you just graduated a year ago and your comparing yourself to people that have spent decades building something extraordinary and taking on way more risk than just going to school in a pretty safe career path. I agree with FR, you’re just young and will need a dose of reality to understand how the real world works. We’ve all been there. What I learned is that success can come in many different forms but at the end of the day as a human there will always be that constant need/feeling of wanting more. As you get older you learn to accept that.

I’m 40, had a solid career working in finance for quite some time, before starting a company that is now really turning the growth corner. My path was learning the industry, seeing inefficiencies and market opportunities in the flow of my day to day job, and then launching something that is focused on those items. This was also done with a good safety net as I’ve been working for a bit. So, that is one way to do things.

You just started. Learn your company and its systems better than anyone else, and you will be successful as an executive or on your own. If possible, become multidisciplinary. It is much easier to be in the top quartile in three things than to be in the top percent in one thing. And, you will see potential improvements between multiple disciplines that are valuable either as an employee or at a company you build.

Edit: I get that you are not complaining about money, but rather about your entire life plan. Relax. It sounds like you are on a good path and your current projections are almost certainly not correct. The world is too dynamic for them to be so.

Have you written about your company at all? Would be interested to hear what problem you are solving (in wealth management or business valuation I assume)

Don’t take Nerdys advice. You should spend the remainder of your twenties busting your ass.

Or else you’ll end up like me - nothing to show for it.

you can always create an of. id bet it be BUSSIN

FR is right - you have delusions of grandeur. But that’s okay - sometimes you have to shoot for the stars to hit the moon (or something like that).

The truth is, 99.9% of people will have zero impact on anything more than the people directly around them. You can accept that, strive to better yourself, and make the most of opportunities as they become available; or you can sit around, throw yourself a pity party, and spend your thirties being bitter about your station because you didn’t mold yourself to meet high expectations in your twenties. I would know - that’s what I did. 0/10, do not recommend.

I’ve been in the same spot as you, so hopefully I can provide some perspective and advice.

My income is much higher than most on here and my wife is unfathomably hot (your mind can’t comprehend how hot). When people don’t give me the respect I’ve earned, first I ask them if they know who I am. Then, I’ll ask them if they know who they’re talking to. This is enough to keep the plebes in line. If things escalate I’ll tell them I need to get home because the Berlin Philharmonic is coming by because my mistress (less hot than my wife, but significantly hotter than anyone you’ve ever met) wants to hear a certain world renowned pianist in a sexy dress play Rachmaninoff Piano Concerto #3 while we make love.

ur a big shot, so i’m not going to disrespect you and ask about your wife, but i feel like the mistress is fair game. so dont be rude, show the noods. thx much