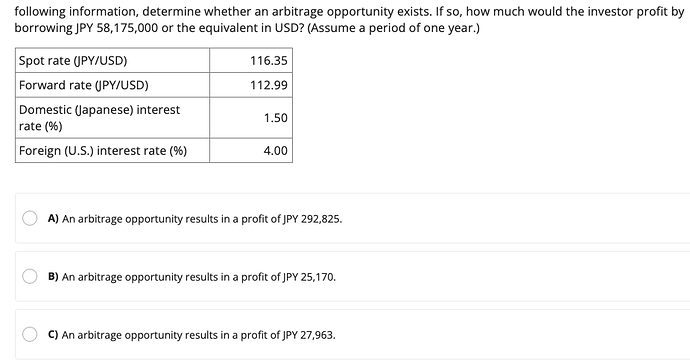 wants 112.99 yen per USD 1 year from now. What does interest rate parity tell you the forward price should be???

ETA: The question says you can borrow foreign or the equivalent USD.

I don’t know what the forward exchange rate should be?

Upon further review, interest rate parity shows that the forward price should be 113.55.

So why would I borrow foreign?

I think the question is trying to tell you that the notional amount is JPY 58,175,000. The way the arbitrage opportunity works is to borrow USD today, convert to JPY, invest at the JPY risk free rate for 1 year, and then convert back to USD at the low, low price of 112.99!!!

Do these calculations relate to the statement, “Up the bid and down the ask”? Help…

The way I view it is that to avoid arbitrage, the valued counterparty

Here is Kaplan’s multi-step explanation of the math: 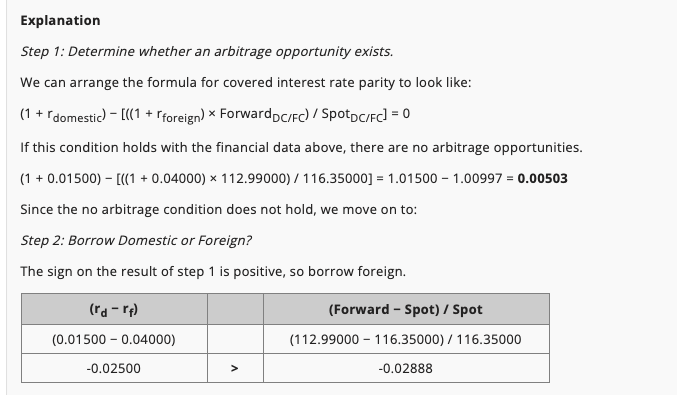 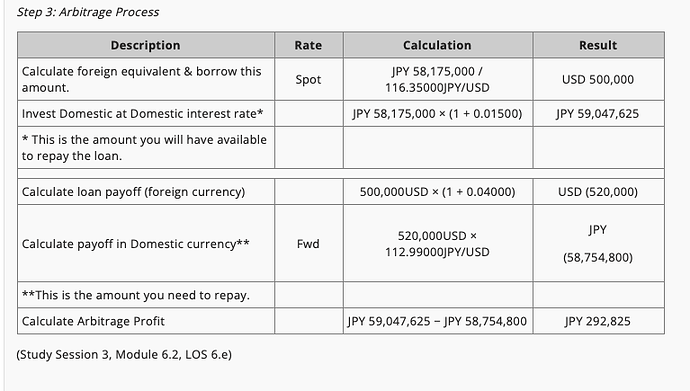 For part 2, allow me to quote a great sage:

I understand the logic of finding the difference between the Domestic and Foreign rates which equals -.025

Do these calculations relate to the statement, “Up the bid and down the ask”? Help…

I hate that phrase, because it doesn’t help candidates understand anything.

Maybe this will help:

ETA: In step #1, they work out that for every JPY invested earning 1.5%/annum and backed by a US dollar loan (the second bracket with all the currency conversions), the investor is ahead by 0.00503 JPY at the end of the year. I think the comparison of the rate differential to the percentage change in spot is just another way to show an arbitrage opportunity exists.

A quote driven market will always have cheapskates. The house is the price setter and will never take a deal that’s contrary to their interest.

I have finally had a breakthrough and have grasped this. Thank the Lord.

In summation, it appears after spotting an arbitrage opportunity, I use nothing but borrowed money. I borrow JPY 58,175,000 and invest it in Japan’s risk free rate. Also, I borrow the same JYP amount, convert it to dollars at the spot rate, invest that money in the USA’s risk free rate, then convert it back to JPY at the overvalued Forward rate of 112.99. Finally, I find the difference between the two JPY amounts, and voila, the difference is my profit.