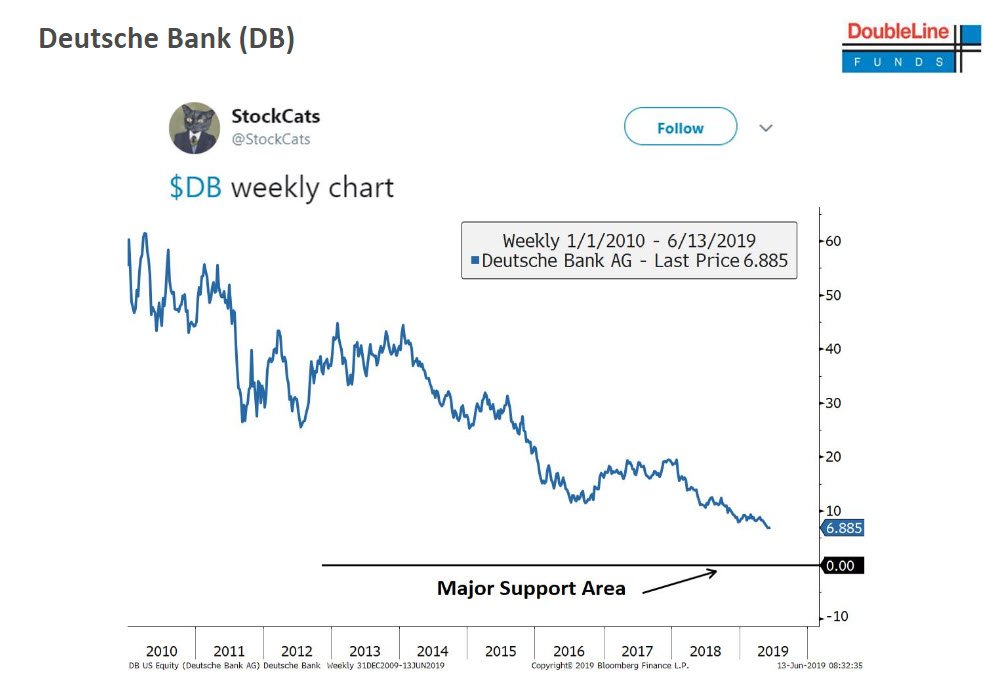 I have been railing on this company for years and still think anyone who buys this stock is the stupidest mofo imagineable.

its selling for 20 cents on the dollar.

their margins are still shit but at least they are profitable operationally. they’ll need to cut more unprofitable people. With their revenues and asset base, they should be generating at least 10b in profits.

the biggest news is everyone is expecting a turnaround thats prolly goign to cost them a lot of money. they are planning to create a bad bank where they’ll house 50b of assets they want to get rid of. so depending on how those sell, will determine if this is a good buy.

like the old saying goes, not touching that with a 10 foot pole.

yeah when german 30 year bond yields go to -2%, i’m not really sure what happens here. i mean, banks are now paying individuals with high credit scores to take out mortgages. so any logical individual with a high credit score can take out the mortgage, stuff the cash into a safety deposit box in the strongest bank in the EU, effectively resulting in the opposite effect that fractional reserve banking has had since it was invented. the leverage of the financial sector if money growth goes negative permanently is scary as hell. what do you do in this scenario? nationalize the entire EU banking sector? not sure how the EU survives that.

if rates go negative there are two things you can do. keep it in cash, and shove it in a personal safe or mattress. low or negative rates is done so that people spend that money.

you are essentially saying that cash now is worth more later. which is counter history because governments usually print so much cash or promote credit that cash becomes worth less.

government can easily fix this problem by spending money on something productive. then issuing bonds to pay for it at negative rates. you do this enough and eventually the common man will just make it rain on strippers. should be nice.

Nery, I would not trust DB’s “book value” of assets at all. I’m not saying that they lying when they report asset values, but every bank has a range where they can argue about the value of these assets.

So long story short, they have lost almost all stock value for a reason. They are becoming a Wall Street pariah for a reason.

not arguing with you. i even said they are creating a bad bank co to hold 50b of their shit assets which is roughly equivalent to their book. also could be just the tip of the iceberg.

i think it was munger who brilliantly said and i paraphrase, i dont really trust the stated assets much, but im 100% sure on the liabilities. if i find, i’ll post. really powerful quote.

also on leverage. its practically the same for msot banks. any bank positiion is a super levered position. they usually have a book of 10% and the rest of the assets is some form of liability. db, however is 5% book, which is a lot lower so they are prolly violating some form of requirement. 10 to 1 leverage vs 20 to 1 leverage.

any bank that is below the average is typically seen as weak. which is whats causing the panic. in any case, most bank are built on trust. so that is prolly the most important thing! i’ll read up on lehman. its before my time. but should be itneresting to draw a comp.

Don’t only focus on book value. Make sure you understand the liquidity posture

DB is not a Lehman Brothers situation. Lehman might have recovered if some entity gave them temporary liquidity. Severe markdown of assets and loss of access to collateral caused a solvency crisis.

DB is unlikely to go bankrupt, but continuous unwind of businesses, and loss of confidence from investors and employees is killing their revenue slowly. I don’t care if business X at DB does well this year, because the banker who created that revenue is going to jump to Barclays at his first opportunity. They are in a business death spiral, not a solvency crisis.

Likewise with any asset markdown - it will impact their revenue and destroy their profits. However, they will just get a bailout and nationalization from ze Germans if they run out of money. They will pay their debt, but equity can go to zero.

The unwind of the business will prolly cause asset markdowns. It’ll be interesting to see how bad those asset markdowns truly are in their bad bank plan. Would not be surprised if they add more assets to it!

Why would they need to pay the debt? If it’s unsecured let them get fucked as well. If the company has negative net worth, then they are going down as well.

First thing is they have to ascertain the assets and place all the junk that will be marked down in another area so we have a clearer view on what reliable assets they have and what their true net worth is!

Well, they need to pay the debt somehow, since the bank is big enough that it creates systematic risk. Of course, as stated, I don’t think default is likely, given how strict stress tests are nowadays and how Merkel will bail them out undoubtedly.

initiall i was thinking of a typical company. when they file for bankruptcy the debt holders become the new equity investors.

but for a bank. unsecured debtholders are in same boat as wages to employees and more importantly regular people who deposit over 100k.

also db has been failing lots of stress tests already.

also i really dont undestand why bailing out typically profitable banks is such a brouhaha. i always thoguth it was weird that people would say its unamerican for a government to own any share of a private biz.

the real problem is contagion in the eurozone. if DB goes down, basically every EU bank is on the noose. they won’t let DB fail in the same way the US didn’t let C fail, which was comparably huge at the time. the real concern is about whether there is political impetus for the complete nationalization of the EU banking sector and if so, who is the nationalizer? the EU itself? the ECB? each sovereign country? if they can’t figure it out very quickly, the ECB will end up backstopping all bank balance sheets effectively resulting in Germany’s assumption of control over European banking against the will of each sovereign’s politicos. imagine if the germans controlled every loan in Europe. debt slavery for all!

If anyone takes over DB it will be the German government. The main purpose of the two German banks, DB and Commerzbank, was to provide financing to German commercial interests. All the big European countries have some sort of flagship bank, like Soc Gen or something. If it comes down to it, German politics will determine what happens to DB.