So after years of being told tariffs don’t work and the US was pitching fake news, the EC now flooded with displaced Chinese steel follows suit now that the US can’t be the world’s dumping ground. Hmmmm.

I get the protectionist policies… national security issues, etc. At the same time the trade off for cheap steel is the demise, or at least significant reduction, in domestic steel production and job loss. Isn’t’ there an argument here that free trade and cheap steel is a good thing for the broader economy? The unions would clearly disagree, but I question which path would lead to greater prosperity.

globalization was goign down before the pandemic. after covid, it only makes sense that it dies even further.
they flood it with goods. we flood it with paper. any country who keeps holding the us dollar is a cuck. the fact that the us dollar is still being held as a reserve for the past 10 years is a friggin joke at this point. we are literally devaluing the dollar you are holding so that we can stimulate our economy at a cheap price.
literally the fed balance sheet went from 880b in 2008 to 6 trillion to date. they printed 2 trillion in march 2020 alone and they just unveiled another 2.3 trillion injection. we waste it by providing ubi, small business loans, and now junk bonds, and munis to save pension aka free money for publci workers.
if i was a foreign country like china. id sell the us dollar. and purchase chinese stocks as they have the best prospects ahead as an investment, and it’ll also stimulate your local economy. if i was some ■■■■ third world country id print a ■■■■ ton of money, and focus on things that will make the local populace more productive to try and negate the inflationary policies.
it can also make sense to buy usd and buy us stocks since we historically had the best market in the world. but to just hold us currency or bonds is bat ■■■■ full retard.
and im not saying the stimulus was not a good idea for the us. it definitely was. but whats good for the us isnt necessarily whats good for your country.

Well its good in the short run but a strong economy is a balanced one ultimately. At the end of the day, large swaths of the country will never be programmers no matter how much we’d like them to and we need an economy that is not out of balance. It is also the case that inbalances create supply chain risks as we’re seeing now. The last concern being recognized is that the west was playing by global free market rules and CN in particular was playing by the mercanitilism playbook so ultimately the playing field needs to be balanced as the EU is now acknowledging.

I’m not saying you’re wrong Nerdy, I just am genuinely not 100% sure what you’re saying or who you’re addressing.

as Black_Swan said, it needs to be a level playing field.
Fiat USD is partly responsible for the trade imbalances, but neo-mercantilism by trading partners bears the brunt.

The post-WW2 monetary order was established at Bretton Woods by Keynes (British socialist) and Harry Dexter White (Soviet agent within the US govt). USD was tied to gold and other currencies to USD, The goal was in part to make USD artificially strong to help Europe recover and prevent another war. See Keynes’ book “The Economic Consequences of the Peace” about the effects of the WW1 peace treaties (which Keynes was involved in) to see Keynes’ motivation. Inflation and tying USD to gold meant that the US had to provide gold at artificially low prices to other countries (another way of saying USD was artificially strong) and it was inevitable that Bretton Woods would collapse, which eventually happened under Nixon after LBJ’s guns-and-butter spending during the Vietnam war.

Gold standard is stupid. We should go back to the cowrie shell standard. Why the hell are people hoarding a shiny yellow metal? If we are going to do something as mindless as that then we might as well just buy passive etfs and take equity stake that is non voting. I am wondering when the day will come when the federal reserve balance sheet is at the same size as the federal governments debt.

am wondering when the day will come when the federal reserve balance sheet is at the same size as the federal governments debt. 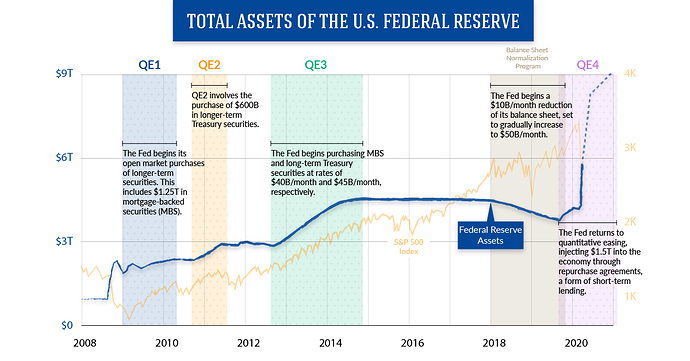 The Fed’s Balance Sheet: The Other Exponential Curve

Quantitative easing has led to an unprecedented expansion of the Fed's balance sheet, leaving some economists with more questions than answers.

i mean it makes sense. fundlach even said he can imagine a day when teh federal reserve is the only thing that owns the bonds because they have been keeping it low for so long.