Nothing yet from CFA Institute.

Good luck to all of us - we seem to be on the cutting edge of testing the process. I have concerns about how to type some of the longer equations in keyboard format. I guess I will try to find some videos about that if there are any. We’re all in the same boat so hopefully it will average itself out… but man, it’s all a bit unclear at this point.

I have concerns about how to type some of the longer equations in keyboard format.

My understanding is that there will be a scanner, so you’ll write your calculations, then scan them.

Trying to use an equation editor in a timed exam makes no sense.

Man I really hope this is the case. But there weren’t scanners for CAIA constructed response, which has been on computer for years. I hope they have scanners for CFA somehow some way. Please keep us in the loop if you learn anything definitive - if anyone will know it’s you sir!

someone already mentioned this in another thread, but according to CFAI:

In responding to a calculation question on the essay exam, candidates are not required to show their work. A correct numerical value will receive full credit. If a candidate is so inclined, it is possible to use the equation editor that is part of the exam software to build a formula as part of a response. Alternately, a candidate might choose to include a simple written description of the steps used in a calculation. If a candidate chooses to show their work, it will be evaluated as part of the response and could conceptually result in partial credit in cases where the answer is not otherwise fully correct.

On another note, CFAI also says that candidates don’t have to show their work, so at least in theory, a candidate could get full credit because they arrived (coincidentally) at the right answer, even if the steps in the calculation are completely incorrect.

Out of curiosity I was browsing through the same contents in the CFAI website. My guess is no better than anybody else’s. Personally, my take is if one has to do away with showing calculation or showing other important steps how is it an essay anymore? How is it different than MCP?

Pro metric’s scanner or use of pen tablet ( as bulky as it may be , effective nonetheless) is as close as it comes to replacing pen and paper.

Don’t want to sound like a p***k but it sure raises question on final evaluation and it’s efficacy. On a distinctly different approach … maybe essay portion should altogether be dumped.

This was my take on things as well. Which is why I am nervous about the equations. Unless it’s very simple, the chance of miscalculation is too great, in my case at least, to risk just putting down a number. I want at least to try for partial credit. But writing out descriptions seems longer than writing equations. The whole thing seems a bit worrisome to me, but everyone is in the same boat I guess. Seems not entirely set up for taking Level 3 in an efficient way, at this current time. But hope it goes well. And are there multiple choice questions now too, in the morning section? Some folks saying this as well?

I’m guessing it shouldn’t be much of a problem. Just do the working on rough paper and put in your answer. Wait, we would be given Roth paper for working right ? I know it’s there for PM. Not sure about AM.

We will be given things to write on, but the question is how to effectively transfer the work to the exam reviewers. In my case at least, I do not want to risk “all or nothing” by simply writing the number in the answer and losing all credit because of getting part of the calculation messed up.

Do the rough work and just type in your final answer.

I think CFAI should follow the KISS philosophy. Give the same (or maybe a shorter version depending on time constraints) written exam as before, but let the candidates scan the paper and submit their answer electronically. It’s cheap (the resource is readily available at Prometric). It’s intuitive (everyone knows how to use a scanner). It just works ^{tm}.

Letting the candidates type the answer have an advantage (to the CFAI, not the candidates) of making it easier to automate grading.

Yeah…They would not want the graders to be out of job😀. Not so soon…
Very interesting where CFAI Is headed

The graders are charterholders themselves. Pretty sure they can make a living off of delivering superior returns.

Let’s think what the word “essay” really means. They also call it a “constructed response”, as an alternative. They could still have an essay type format where some questions are numerical and some are not. To be honest, when I enrolled to sit for the CFA exam I had not imagined a demonstration with formulae would qualify as “essay” but well…I had to adapt.

This is a rumor I very much wanted to believe. Sadly, the CFA Institute confirmed there will be no use of scanners at Prometric. It’s an all
or nothing approach, you either get every single step right, or you’re done. Typing out a bunch of formulas or even steps to get to the final result will kill your time management. And if they will rely on more “list memorization” type question, this will be a boring as hell test. I was most excited about L3 material and eager to take the test, but I find this change demoralizing (and I never sat for L3 paper based). 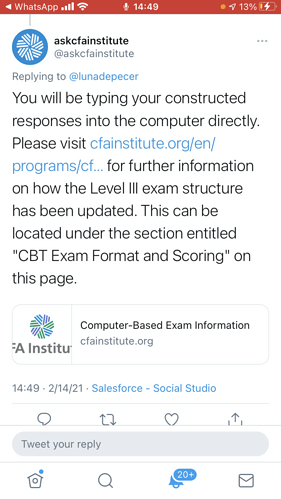 Let’s hope so, for their sake, since the CFA Institute is no longer paying them at all - “volunteer basis” graders. 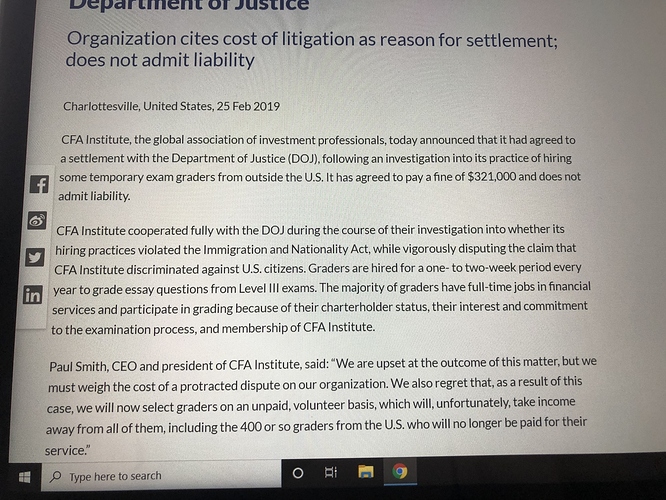 No news about the CBT? There are few months to the May exam and there is nothing to practice? That’s quite tough