How will things be in one month?

NYC is already on the decline with cases being around 1/4 of the peak, this is with much more testing being done so technically the decline is even more significant. The entire U.S is also on a decline albeit not with the same steep slope as NYC.
I think if testing capacity is increased to something around 1 mil a day and the new infection rates drop to around 1000 a day it would be safe to open back up assuming some measures are taken to avoid a second wave.
What do y’all think?

let it spread! we should only shut down if the health care system gets overwhelmed. it is not!

After speaking with more and more people I just don’t see how things fully go back to normal until there is a vaccine.

Many people don’t want to risk it… they’re used to social distancing and are worried about their kids getting infected etc. I don’t see how that changes if suddenly the govt declares everything re-open. The virus is still out there, and I’ve been reading a lot about the high chance of a second wave.

sure pracitice social distance. but open up the economy. right not we still hve stay at home orders. those things need to be lifted. and stuff needs to be optional. let ppl decide if they want to risk it. we need to know if we need more stimulus. and we’ll never know until things open up. its a ticking time bomb imo. the longer we wai,t the poorer people will get, the more cautious they will become, and the more stimulus we will need.
its important to remmeber that this wasnt about wiping out the virus. this was about slowing down the spread of the virus. it has slowed. mission accomplish.
lets take a random person. who lost his 120k job. say he has no assets. and spends 10k a month. at 10k for 1 month he wont file for bankruptcy. but say ■■■■ is shut down for a year and he racks up 120k i ndebt. now banrkuptcy is more attractive. and credit is affected for the next 7 years.

The problem is that people have shown that, left to their own devices, they won’t do this.

the whole point is for this to spread. majority is going to get infected at some point this year. so just let it. if health care systems start to get overwhelm then slow it down again.

I think in aggregate, most people have been following the rules. There’s always a few who will do their own thing but I’d guess that is the minority.

I mean my brother hasn’t seen his own daughter, aside from standing 20 feet apart in over 2 months. That’s beyond straight edge. My other brother won’t take his kids to see their grandmother out of fear of contraction. Same goes for my in laws and their families. I haven’t seen anybody face to face except runs to the grocery and liquor stores in over 8 weeks.

It’s overkill imo. But from speaking to different people I don’t think they have plans to do much until there’s a vaccine. I’m leaning more and more with Nerdy, let people make their own decisions because this can’t continue for another 12 months+.

If making their own decisions affected only them, I’d be all for it.

Unfortunately, making their own decisions could affect innocent bystanders whom they encounter later.

For sure. It’s a frustrating situation. If the govt opens things up (parks are officially reopen in Toronto next week) people will go out. You just can’t hermit up in your house for a year. At least I can’t. And there’s really no in between. Swan was saying something about a vaccine being close but I haven’t heard anything concrete at all.

i follow it. they will prolly have a bunch manufactured before the year ends. but its up to clinical data before they can start using. they’ll have about 1 billion rdy by early next year. most the ppl who are creating other ■■■■ are pikers. so their impact is low. 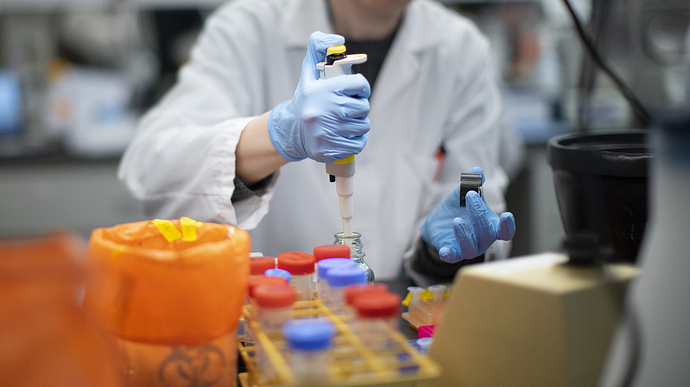 These 23 companies are working on coronavirus treatments or vaccines — here’s...

A mix of legacy drugmakers and small startups have stepped forward with plans to develop vaccines or treatments that target the infection caused by the novel...

I don’t see this lockdown strategy as a valid option that can continue forever. The whole selling message of lockdowns were to prevent overwhelming of the medical system,now they have changed the narrative to “we can’t get back to normal until a vaccine is found” ?

I don’t see this lockdown strategy as a valid option that can continue forever.

Nor does anyone else.

Unless your name is S&P500 and you’re getting ready to set a new normal of 50 times forward earnings multiple and just completely shrug off any and all future shocks.

Stock market used to actually work believe it or not. Thanks Hank Paulson.

I give you exhibit A: Orange line is unemployment inverted against the blue line which is S&P 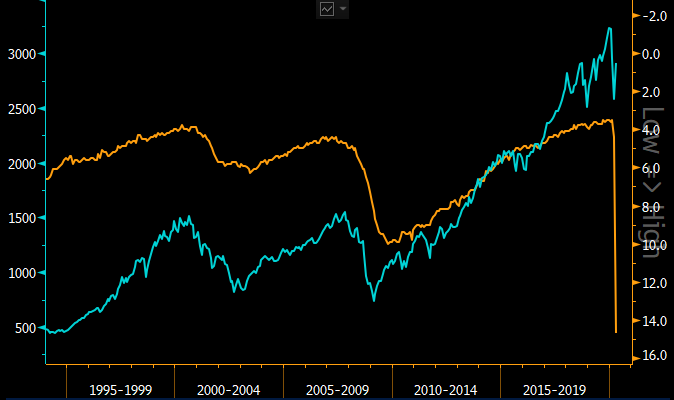 That’s an interesting chart to say the least. The difference this time around is the support for Joe worker as opposed to support only for companies. Had the govt not bailed everybody out (some ppl are actually making more right now than when working) this would have been a complete disaster.

I’m finding more and more that it’s the low income earners mostly affected by this. Large companies are not laying off in droves as many suspected. Interesting about the S&P is that the tech sector is keeping it afloat. In a complete turn of events, growth stocks are massively outperforming value. It’s backwards, but backwards is the new reality.

I think what I should have expanded on a little more though is the fact that I keep hearing people say “the economy will just bounce right back”. The sorts of people who think we’ll just revert back to 5% unemployment are who I’m talking about.

I really don’t understand how the older generation (who controls the most wealth) is going to start reintegrating into society as if nothing ever happened just because storefronts are open again. My parents don’t want to leave their house (granted they live on a private beach in Sarasota) except to go to Publix once a week. Which to me, signals that other households are likely scared too. I do not for the life of me understand how people not wanting to leave their homes doesn’t translate to kneecapping aggregate demand. Which means at some point investors are going to have to start incorporating lower earnings into their valuations at further out timeframes thus warranting lower stock prices.

IDK i’m bleeding $$$ every day right now that markets tick up. But it makes sense for them to fall I’m sooo convinced.

The one thing I learned in 2009 is to never, ever bet against the fed. If they’re pouring trillions into the market it’s only going in one direction.

But yeah I agree that people will not just go back to normal until there a vaccine. I just don’t see that happening based on my own conversations with people. Until then, the fed, govt stimulus and e-commerce will keep the S&P afloat. There’s also nowhere else to go for yield…

Double axis graphs are a chart crime. Since you work in sales, I’ll allow it. But don’t try to become an analyst with that nonsense.

The market is still working. The bank sector is trading at pretty low levels, which reflects the fact that on average this impacts small businesses more than big businesses. If the market is going against your expectations, you can just blame some Fed boogey man or you can figure out what you are getting wrong. Odds are you are getting it wrong and it is not the boogey man

Well ultimately he just bought 2x leverage on the downside and the market moved against him. CEOs a gut feel guy. He put it all on red and it came up black, for now. But in reality both monetary and fiscal stimulus packages are playing a huge role in propping up the market. This is not a case of fundamentals holding firm in the face of great uncertainty.

It’s companies in discretionary sectors and low quality workers. They are doing pay cuts for companies that are heavily affected too for the entire tank and file. Also important to note that government stimulus was 2.1 trillion but fed balance sheet expanded by 6.1 trillion. That 6.1 trillion is a direct impact on rates for every company out there. The amount of liquidity provided is keeping many companies from blowing up.

Multiples btw for 2020 is around 20x, not 50x. But I think analyst estimates are too high, as many of them expect a v shaped return to earnings by the back half. 2021 estimates are more reasonable at 17.1x. But again they are using predictions that everyone will be spending the same way. Which I don’t buy into as well. 20 percent are unemployed and the rest is scared they will be losing their job next, so I doubt things earnings will revert to previous trajectory. Right now asset prices are being pushed up since there is no alternative due to low rates. Everyone expects earnings to follow, but I don’t! Even with a vaccine by next year, imo, people are scared shitless and everyone will be saving more.