It seems like the dolar cost for the price of beef at the market keeps going up. Could be due to subsidies?

Yes, Franky, I’ve been intently studying this price phenomenon as well, and remarkably, not only are subsidies on the supply side driving up the cost, but surprisingly, sagging demand is causing the price to go up as well. It’s all there in the economic documents, you can go ahead and read them but you won’t understand it any better than I will. Crazy times.

Well, when you give beef cows and milk cows govt subsidies their’s no incentive for them, and average joe and jane get stuck with the bill.

This cow stimulus brought on by big government doesn’t “stimulate” production with these cow bums, living off Uncle Sam and taking these free checks, I’ll say that much. This has truly been an economic period like no udder.

everything will be going up. soda, your day to day hygienic products. the cost to transport has gone up significantly. there is a huge energy issue rn. the price of commodities have gone up as well. very imp to remember that core inflation excludes food and energy as they are more volatile.
in addition there is a bottleneck issue at the ports. shop early because a lot of that product is stuck in the docks right now. thats all your christmas products from china. suppsoedly biden has expanded the hours
in the ports to fix bottlesneck issues.

i honestly think inflation is transitory. maybe elevated for a year or two since these prices are here to stay but then it’ll normalize to the 2.5% avg we are used to. this is not a 1970s to 1980s event. people dont understand how rare that instance is. the last one before that was in the 1940s to 1950s and one could argue that is to make up for the great depression. so maybe 20 years of high inflation out of 100 years or a 20% chance.
i think we have a one time increase in prices and then we normalize to the 2.5% per year we’ve grown so accustomed to.

20 years I doubt it. Went to a speech last week (or maybe the week before?) where the guy made a joke about how if even Japan is experiencing inflation - then you ‘know’ it’s transitory.

He was Lee Ferridge of Statestreet.

His whole 45 minutes on inflation was predicated on the fact that the government was really painting the picture that September 21’ was going to be “THE Great Re-Opening” which initially saw a spike in inflation, but as soon as October, economists were already significantly lowering their growth forecasts.

I’m A Twenty Year Truck Driver, I Will Tell You Why America’s “Shipping...

I have a simple question for every ‘expert’ who thinks they understand the root causes of the shipping crisis:

Government has a $28 trillion incentive to let inflation run and I wouldn’t be surprised if they invented the word transitory given no one knows how long transitory actually is.

BofA research suggests that from 2010 to date, government QE explains c50% of the S&P500 price returns. If this is remotely accurate I wonder what will happen if they begin tappering

BofA research suggests that from 2010 to date, government QE explains c50% of the S&P500 price returns. If this is remotely accurate I wonder what will happen if they begin tappering 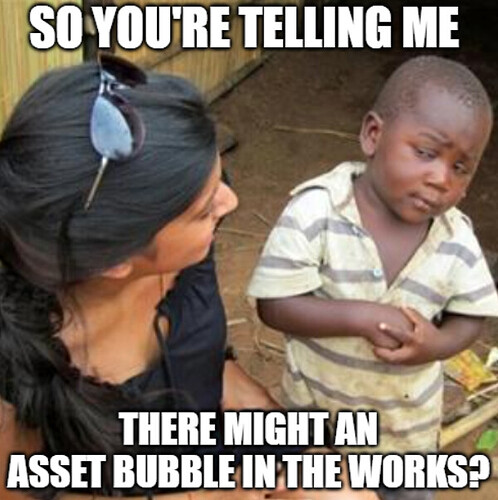