L3R36: Confused about the Cost of Errors in manager selection process 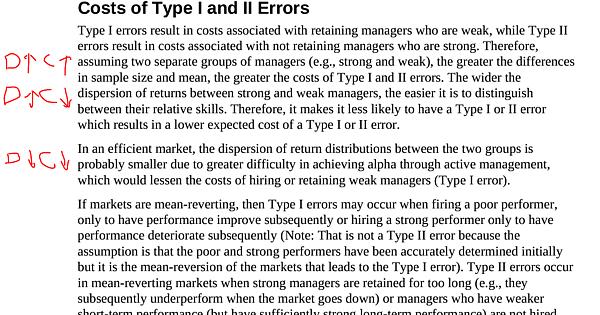 So if dispersion go up, the cost goes up. Same direction.

The wider the dispersion of returns between strong and weak managers, the easier it is to distinguish between their relative skills. Therefore, it makes it less likely to have a Type I or II error which results in a lower expected cost of a Type I or II error.

Here, if dispersion go up (wider), the expected cost goes down?? Opposite direction. this contradicts the previous sentence?

In an efficient market, the dispersion of return distributions between the two groups is probably smaller due to greater difficulty in achieving alpha through active management, which would lessen the costs of hiring or retaining weak managers (Type I error)

Really confused about the correlation between dispersion of return and cost of errors in hiring managers.

The difference is in “cost” vs. “expected cost”. All 3 statements are consistent, just poorly worded.

However, for the same case above, it would be easy to tell who is really bad and really good. Kind of like distinguishing between black and white vs. a shade of gray. Therefore, even though an error will be very costly, the probability of it happening is very low. This means the “EXPECTED cost” is very low.