I really wanted to be there, worked super hard to help him get elected. Lost a good number of Facebook friends, but it was worth it.

were you working for the campaign or just a keyboard warrior?

He sacrificed social media friendships for the betterment of the nation.

That’s what our nation is about - sacrifice for the benefit of the country.

President Trump has his morning coffee as Obama exits the White House for the last time. 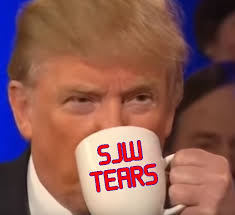 lmao you didnt do anything but lose friends dude, absolutely zero impact but annoy people. I unfriended plenty of bernie/HRC/DJT people during this election and not one of them influenced anyones vote

Enjoy today! Ill be thinking of everyone mocking black people for being so excited about BO’s inauguration. Hopefully it goes off without a hitch though, his supporters that went down deserve a nice event. Was in DC the week btw xmas & new years and they were building a bunch of grandstands and stuff it was cool to watch.

May, maybe not but I do know that companies and politicians spend billions of dollars a year getting their message in front of people. If anything my Facebook feed, put doubt in the mind of undecided voters on crooked H, since the media let us down this election. I don’t have the numbers to quantify it so that’s all I got.

And thanks! I will enjoy it from my office.

O man this is rich - I bet Obama is seething.

Is Hilldawg drunk? she looks drunk.

Is Hilldawg drunk? she looks drunk.

Scary to imagine how crooked H could have been president.

wow, Pres Trump whipping it out in front of everyone. fucking amazing.

I want the Down syndrome trump daughter. Marla maple one

^leave barron out of this

you do realize he didn’t really say anything of substance in 16 minutes right?