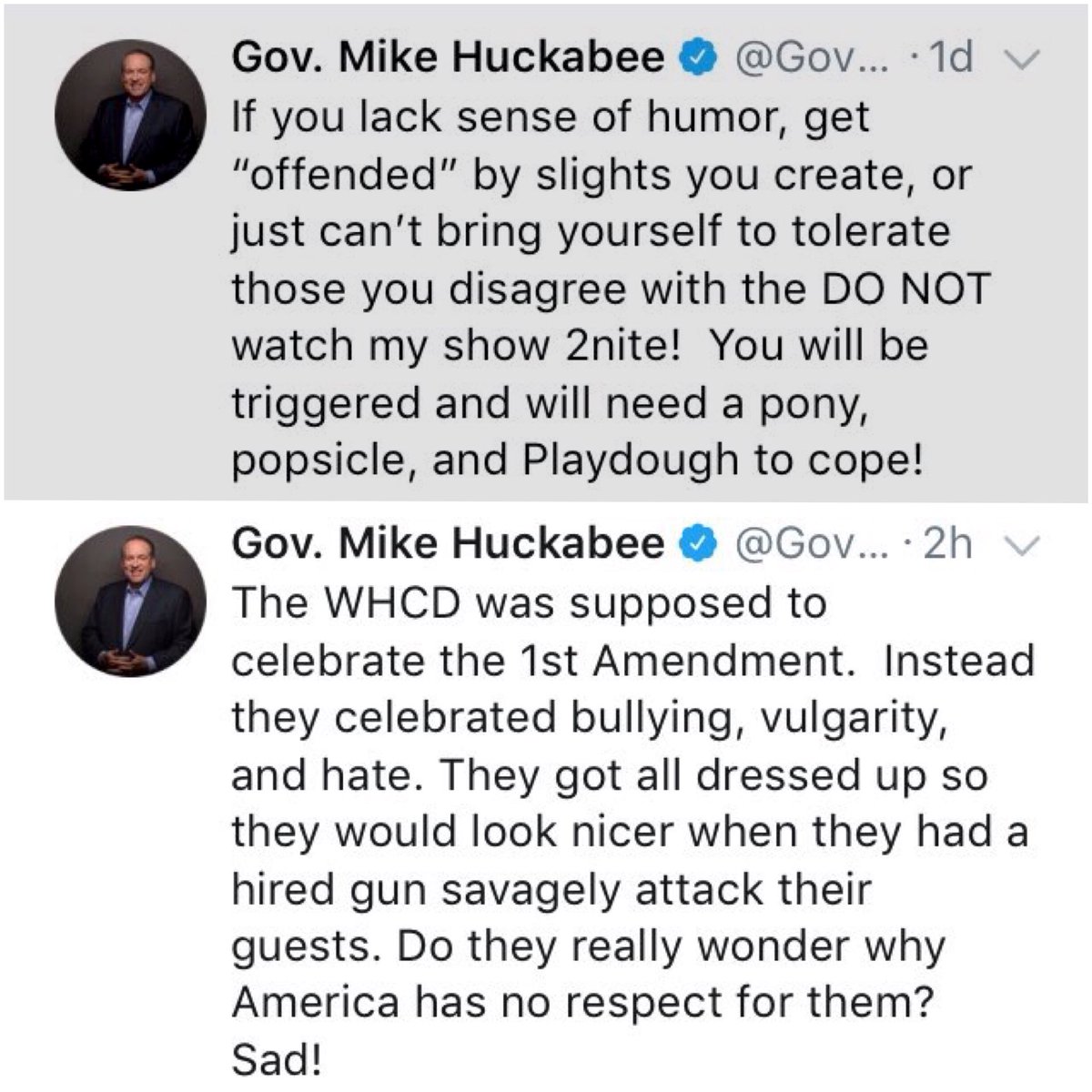 likely a fake article, don’t care. This is an ugly soul.

likely a fake article, don’t care. This is an ugly soul.

Charlie, 80% of your daily reading is fake articles. Yet you proclaim every one as the cold, hard truth when you read the words.

I admit when I don’t have something right. I’m a man. As for the rest, school children will be required to read The Turd Material in grade school history class.

I give the performance a 2/10. Also, I don’t see how huckster should be offended?

Yeah just a comedian taking low hanging fruit and Republicans twisting this into something to try to be outraged about.

“looks like Trump is the one ‘pussy’ we can’t grab”

Lost it at that. Five star joke - honestly.

Edit: Has trump tweeted about it yet? He could pull off a power move and defend the comedian.

Michelle Wolf Did What Comedians Are Supposed to Do

I watched it again and the material isn’t that bad. It actually would have been good if executed correctly. The problem is she did not balance it with anything positive - we kid because we love. If you’re going to roast, everyone knows you end with something positive. But it was apparent there was genuine dislike/hate and that’s why it fell flat. Like Roseanne astutely pointed out on twitter - good comedy comes from love not hate.

This past weekend they aired their disgust at the comedian Michelle Wolf’s takedown of Sarah Huckabee Sanders, the White House press secretary, at the White House Correspondents’ Association Dinner. “It’s why America hates the out of touch leftist media elite,” Ms. Schlapp tweeted from a limousine en route to an exclusive after-party organized by NBC/MSNBC.

Business is in the meantime booming at Cove Strategies, the lobbying and public relations firm the Schlapps founded in 2009 (Ms. Schlapp stepped away from the business when she took her White House job). Their lobbying income alone has surged in the year since Mr. Trump took office, to more than $1 million in 2017 from $600,000 in 2015. Koch Industries — Mr. Schlapp is a former chief Washington lobbyist for the corporation — was Cove’s first client. He said there was even more income from Cove’s strategic communications work, which he declined to reveal.

_Ms. Schlapp has been a board member and paid strategic communications consultant for the National Rifle Association, a role she gave up the month she entered the White House. In 2015 she earned $60,000 from the N.R.A. for an average of one hour of work per week, according to N.R.A. tax filings, and $45,000 in 2016. _

_“I hate losing friends, which I have lost,” Mr. Schlapp said, acknowledging the ire the couple’s support for Mr. Trump has drawn from some fellow Republicans. He spoke in a cafe near his office in Alexandria, Va., where the Schlapps just bought a $3 million home to go with their weekend retreat, Victory Farm, a 30-acre idyll in the Blue Ridge Mountains. _