I host a barbecue every once in a while. We barbecue hot dogs and tofu burgers (for the vegan people). I always make sure that I have a lot of PBR to go with the barbecued food. There is nothing like a barbecue to celebrate various yearly holidays. During this event, we barbecue food over a fire. With a grill.

^^County Line was one of my favorite restaurants in San Antonio. Salt Lick never really did it for me.

(In order to be fair–I never went to the Driftwood location. I only went to the one in Round Rock.)

Once booked a long layover at IAH so I could rent a car and go have lunch at Harris County Smokehouse. Great stuff.

NYC BBQ is a joke. I’d pay to fly STL and Greenman up here and take them out to Dallas BBQ if we can record their reaction to the food… would make for a great YouTube video.

Problem is there’s no room for proper BBQ smoke stacks in New York, so the BBQ isn’t authentic (i.e. the meat is just slow cooked and doused with crappy barbeque sauce, or it’s cooked somewhere else and brought it and heated up so it’s not as good).

I really liked this place in NYC. 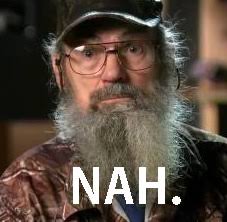 Everybody but STL be trippin’!

Kansas City has the best BBQ in the world, end of discussion.

Real answer though, saw someone post it online and forgot about it. Best bbq I have had in nyc was at Butcher Bar in Astoria.

If you’re in NYC and want to get the best BBQ, go the LaGuardia and buy a ticket to KC.

Sweep, have you ever been to Lockhart?

Next time you find yourself in Austin, do yourself a favor and rent a car and take the 45-minute drive. Eat at Black’s, Kreuz Market, and Smitty’s. Then you come back here and tell us how it compares with KC.

(Not trying to one-up you. I’m genuinely curious about the differences. It’s hard to see how BBQ can get any better than the Texas Trail.)

While you’re at it, if you think you’re going to spend significant amounts of time in Texas, you should buy the book “Prophets of Smoked Meat”.

I miss Texas BBQ. Is the concept not allowed to cross state lines?

I understand there’s a relatively new place in Austin called Franklins’ (think that’s it) that is supposed to be the best in town.

Out of curiosity, why would anyone think that New York barbecue would be authentic?

That sounds stupid to me.

I dont think anyone with a brain really thinks its authentic, but you want something similar so you get some. Same reason anyone in the south/midwest would get pizza/cheeses steaks/bagels etc.

I dont think anyone with a brain really thinks its authentic, but you want something similar so you get some. Same reason anyone in the south/midwest would get pizza/cheeses steaks/bagels etc.