Bit confused about this question on practice exam. This has to with
" Olivinia Heritage Case Scenario" The final query is on the exhibit below and the answer is 1. Aren’t we comparing the current portfolio to the taa portfolio. Why is the comparion with policy portfolio? 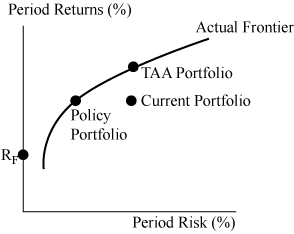 The most appropriate conclusion that can be drawn from Exhibit 3 is that:

What, exactly, are “management’s risk-return objectives”?

Hi Bill why is 2 and 3 obviously wrong?

#2 is wrong because a corner portfolio, by definition, is on the efficient frontier.

That depends intimately on how you measure “better”.

By any reasonable measure, it does.

Are you able to answer my original question?

Icombed through the passage and I am not seeing this. This was also what tripped me up. I see what you mean by why number 2 is wrong.

Olivinia is an oil-rich state in the country of Puerto Rinaldo, which uses the US dollar as its official currency of exchange. In 1981, the state’s legislature created the Olivinia Heritage Fund (OHF) to collect a portion of the state’s non-renewable resource revenue and invest it on behalf of future generations. James Lafferty, the managing director of the fund, is one of the keynote speakers at the Global Wealth Creation Conference. He begins his presentation with a brief overview of OHF’s history (Exhibit 1).

An Overview of the Olivinia Heritage Fund

Lafferty states that ever since the fund was given the authority to vary asset class policy weights from their strategic levels, it has actively engaged in tactical asset allocation (TAA) using a variety of proprietary short-term forecasting tools that have been developed in-house. He provides the data in Exhibits 2 and 3 to illustrate the results of one such shift in the fund’s asset allocation following a signal from its TAA model.

Example of a Short-Term Shift in Asset Allocation