Perez Musharraf is coming back to my favorite country, Pakistan, after 5 years of banging hookers in Dubai. This should be entertaining.

The best thing that can happen to him is that he gets arrested as soon as he enters the country. If he is allowed to roam free he will be Buttoed within a few days.

I don’t get politicians. They are just obsessed ego maniacs. I would rather stay alive in Dumbai, drive a porsche, and bang Uzbeki hookers than go back to that bag of snakes. 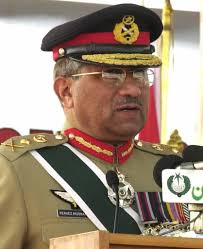 Wow. So this must mean that Kayani might be “retired” and this guy can be the new Viceroy.

You think? I’m not hopeful for his chances. But it wouldn’t surprise me if Pakistani’s view his regime as the “good old days” compared to what they are now dealing with.

Maybe once you have a taste of political power, money seems boring by comparison. Why would Mitt Romney want to be President when he can have any life he wants with his money? Or maybe Musharaff truly believes he can make Pakistan better. His definition of a better country is probably very different from ours.

I could make Pakistan a better country just by getting rid of all the Pakistanis in it. But as an Indian my opinions might be biased.

Yep Mitt, Pervez and probably almost all politicians are cut from the same cloth. Egomaniacs.

Maybe once you have a taste of political power, money seems boring by comparison. Why would Mitt Romney want to be President when he can have any life he wants with his money? Or maybe Musharaff truly believes he can make Pakistan better. His definition of a better country is probably very different from ours.

Actually what frequently happens is that once people have wealth, they generally seek greater and greater power.

Romney is very rich, but his wealth can’t buy the power of the presidency, and that job only pays 400k

I have been a pointy-haired boss and I can tell you that I could feel my thought process changing. Power (at least to me) is a drug - I didn’t want to let go of it, and it was a rush knowing I could control people’s actions and emotions. Partially of course, I was still just a PHB at work, not even close to the power that presidents hold. The curse of self-awareness is what saved me from being a total dick, I believe. And now I see my colleagues behaving like pigs with their subordinates because they don’t even realize they are doing it.

Ironically, now that I am enjoying real R&D and it seems to be going well, if we succeed; I will be an even bigger PHB. I will almost have to be two different people - a macho my-dick-is-bigger-than-yours with the executives; and a “treat people as people to get shit done right” normal guy. For whatever reason, the biggest turds float to the top.

Footnote: I fucking hate HR lingo. People are not resources.

This is not news until he sets foot in pakistan. He has announced returns in the past and then changed his mind in the last minute. I don’t think he has gained any support inside the country since his last “return”.

F*** Musharraf! Except for few supporters among urban middle class of Karachi, nobody gives a sh*t about his political party. We are in shitty place because of these a-h*le dictators.

^The religious nutcases hate him cause they see him as an american sellout. The more progressive pakistanis can’t stand him cause he is a military dictator that usurped power. The high-ranking officials in the military dislike him cause he stepped on many toes while he was an acting army chief. He’s certainly highly delusional to think he might get a trace of welcoming reception upon his arrival. His influence is nowhere near comparable to Benazir’s at the time of her arrival. He’ll probably change his mind once again right before the announced date and stay put where he is.

Sending out the death squad!

Well, he had the balls to actually return this time so my prediction was wrong… still, the only headlines I can see him making would be in conmection with assassination attempts - he has no political capital at all

The only headline he will make is when his head gets blown off by a pashtun. I bet right now 50 percent of Pashtun males are in line trying to figure out how they can get glory by being the first to blow themselves up in his face.