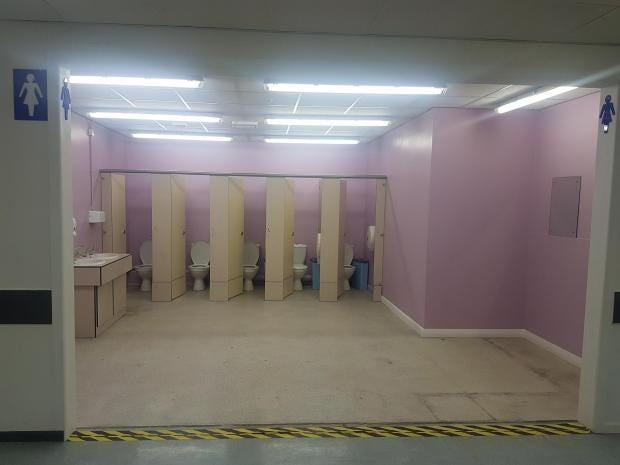 “It is believed that the decision has been made by the school in a bid to stop smoking, bullying and truancy, with the new layout meaning pupils can no longer hide in between lessons.”

“Pictures sent to The Independent show that the toilet cubicle doors are now exposed to an open corridor, and are in clear sight of at least one classroom and a CCTV camera.”

The solution to bullying is to have everyone watch you poo. Makes sense.

Making America Great Again, one stall at a time.

How about make disciplining children NOT illegal?

Over here in Asia little Jung-wan Park Jr would get beat so hard, the kid would never do it again. And then you could leave the doors on the bathroom! I’ve seen it, discipline works.

i never once took a dump at school… the bogs were gross dude!!.. damn!! These toilets are like 100x cleaner than the ones at my school.

I think this might actually be a good thing. Lets see how it plays out.

Next the libs will try to ban pooping, because “it’s a social construct.”

Next the libs will try to ban pooping, because “it’s a social construct.”

That’s right. Let they poop at home. Savings on the cleaning service as well.

Let they poop at home.

Let them poop their pants!

Just to give a little British perspective on this, they’ve removed the door to the room not the doors to the cubicles. and as it’s in the UK the cubicle doors actually give you some privacy as they are from the floor to that bar along the top and there are no gaps between the door and the frame like you guys seem to like in the US.

They need to eat a tide pod… It’ll make the hallways smell clean, and it’ll remove the skid marks from their underwear.

all the reddit threads say womens washrooms are the worst to clean up after. this sounds like a horrible idea.

i’ve seen snaps of women’s bathrooms. lots of thotties dancing to music inside it.

Yeah, this is yet more fake news, we got conned!