Carbon copy of what was going on 34 years ago. 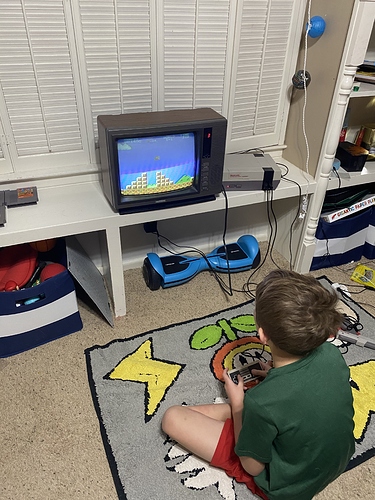 He also played Duck Hunt. When the dog annoyed him, he said “I wish I could shoot him.”

I understand, son. I really do.

How many times did he need to blow on the cartridge or hit the connectors with a Q-Tip dunked in rubbing alcohol before that worked?

The whole thing began as a joke. He has been wanting a TV in his room for a while. Well, the CPA firm I share an office with had this old one laying around. (Yes, they have stuff from the 70’s and 80’s, because they’ve never thrown anything away—ever.)

So I brought it home as a joke. To be honest, I didn’t even think it worked. But he wanted to plug it in, so we did. Then he asked if he could watch it. I told him that we probably had nothing he could watch. (It only has a coax input.).

But then I remembered—my NES and Super Nintendo still work!!! And so the legend is reborn.

The common spelling of bewb is censored.

he prefers the old games over the new ones? give him pokemon lol