. Take care of your dogs hearts 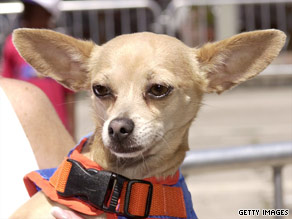 Uttering the words “Yo Quiero Taco Bell,” Gidget, a female dog, played a male dog in the commercials. She was cast as the girlfriend of the Taco Bell Chihuahua, but the director changed his mind at the last minute and made Gidget the lead dog, Chipperton said.

Chipperton worked with Gidget since she was an 8-week old pup and traveled everywhere with the dog. Gidget even opened the New York Stock Exchange. Roles were hard to come by for the pooch after her popularity soared from the Taco Bell ads, according to her trainer.

“She was kind of typecast, so she never really got much work after that,” Chipperton said.

Gidget was cast in the 2003 film, “Legally Blonde 2.” She also had a role as an extra in the 2008 animal-themed movie, “Beverly Hills Chihuahua.”

“That’s what her life had come to over the years,” playing small background roles, Chipperton said.

The Chihuahua loved being on set.

She “acted like a big dog and had a big dog attitude,” Chipperton said, adding that once she arrived on a soundstage, she had no trouble finding her way in front of the camera.

She was a real pro, but when you look at the commercials, she really didn’t do much, her trainer said.

“She didn’t do amazing dog tricks, she didn’t do stunts, she was just playing the character of a teenage boy (dog).”

At home, Gidget was laid-back, happy and low maintenance, according to Chipperton.

Gidget, a female dog, played a male dog in the commercials.

This is the Amerika progressives want. Sickening.

Worst thing to happen in trumps first year in office yet