It seems like whoever she dates next will have a serious case of ChickenTikka syndrome.

What the hell, I was just reading an interview of him saying how great everything was? Dunno how movie stars have so much trouble with marriage.

my faith in true love has been shattered into pieces

All I know is if Tom Cruise can’t keep a girl, what hope do I have?

I think the biggest problem with actors is the volatility in their career. Even if they keep all of their money (which can be equally volatile), their egos are strongly dependent on their current popularity and it’ll end up blowing up the relationship with role reversals. 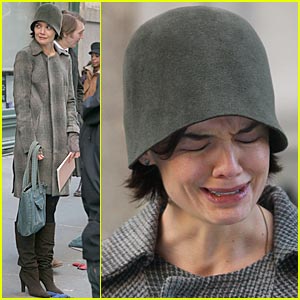 Wasn’t this Tom’s 3rd marriage? He’s rich as heck, so I’m sure the child support payments are pennies to him.

Katie is hot though

Tom Cruise is a closet case and a Psych Ward Willy type of cat. This does not surprise me.

BS you’ll be fine as long as your arent an emotionally unstable asshole, and even then, some women like that.

BS you’ll be fine as long as your arent an emotionally unstable asshole, and even then, most HCB like that.

Maybe now he and Travolta can get married?

Anybody delusional enough to practise a religion, esp. something as bizarre as Scientology, has got to be a weird psycho freak!

Good on you, Katie for getting rid of this nutter and for getting paid $18m (3 for every year of marriage)

And Anderson Cooper is gay. Woohoo!

I like Tom Cruise. Seems like a cool guy. Could see how he might be a little weird to talk to at times with some of his views, but on the weekends I chill with a bunch of hippy reefer smoking kayakers, so I’m used to hearing non-sensical ramblings.

And Anderson Cooper comes out. Coincidence?

Anybody delusional enough to practise a religion, esp. something as bizarre as Scientology, has got to be a weird psycho freak!

You know, I don’t think all these Hollywood Scientology guys actually believe in the religion. How could they? That stuff is crazy. I bet they actually join the club for networking purposes. They are probably willing to pay the annual dues and join a creepy club because the credential gets them more looks when they apply for movie jobs. So basically, scientology is like CFA for actors.

Speaking of weird coincidences, each of Tom’s 3 marriages ended when his wives were 33 years old. Apparently unintentional, but if not, then great strategy.

That’s a very absolute statement there

And Anderson Cooper is gay. Woohoo!

BTW, be careful with Greek debt. They might not be able to pay it.

(One of the funnier AC bits)