Any triathletes in the forum? What races are you doing?

I’m not sure that I would call myself a “triathlete”, but I am doing my first sprint triathlon this weekend. Just a local race - nothing special.

Good for you ohai and good luck. How have you been training?

Yeah, I used to be pretty into triathlons, specialized in horseback riding/bobsledding/dolphin chariot tris. I was always best with the bobsledding, probably because my legs were usually pretty fresh and warmed up after the horseback riding. I had to quit when I crashed my chariot…it was pretty ugly.

Good for you ohai and good luck. How have you been training?

Basically, rotate between swim, bike and running. Time commitment can be based on how fast you want to do the actual races, but I have been putting in about 10 hours/week lately.

I haven’t been training very long for triathlons specifically, so most likely, my time will not be good. However, I decided to sign up for fun and maybe get more into it if things go well. I like the idea of rotating between several sports, as this spreads the effort over different parts of your body. Before this, I mostly just went running, and this would probably have led to pain or injury at some point.

I hate cardio, but otherwise I think triathalons are cool. I run one marathon each year. That is more than enough cardio for me.

Good luck ohai! I’m relatively new to the sport, but have 5 this year including a half ironman. Should be a lot of fun.

Yeah, a lot of people die during triathlons, apparently. Usually it’s during the swimming portion. The problem is that all these 40 year old guys get off the couch and start to do hard training. Then, they get heart attack in the water where it’s hard to save them…

CFAcountry - good for you. Hopefully, I will get to that point. My running and swimming are pretty good, but my biking sucks. So that is something to work on.

^ I did a sprint tri when I was in my early 20’s and nearly drowned. The safety boat was lurking near me like a buzzard. I ran for 100% of my training and no idea how inefficient a swimmer I was. If it had been an ocean swim or in a deeper lake, I would not have made it out of the water under my own power. I still have a scar on my foot from stepping on something on the floor of the lake as I water-walked 2/3 of the swim.

CFAcountry - good for you. Hopefully, I will get to that point. My running and swimming are pretty good, but my biking sucks. So that is something to work on.

Biking is easy to fix, assuming you have clipless pedals. Everyone grows up learning to pedal by pushing down on the pedals, which is very inefficient. Instead, pull the pedals from the front of the revolution through the back of the revolution. Seat height is also key to efficiency - your knee should have a very slight bend at the bottom of the revolution. Make smart use of the gears too so that you maintain a comfortable cadence. A lot of people make the mistake of trying to turn too large a gear and tire themselves out. I find 70-80 rpm to be pretty comfortable.

Yeah, have not gone clipless yet, unfortunately. I only picked up the bike about a month ago. This is the first thing I plan to change after this weekend’s event. Must put an an end to those old guys who pull away from me on the hill… Other than that, the bike setup itself is ok (I did get professional fit at the shop). Only thing is my body is not conditioned for hard riding yet. Running 6 miles is much easier for me than biking 30 miles. It’s more of a problem of the cyclist, not the equipment.

Always wanted to do tri but I have bad ankles from skateboarding in my youth. I swim 3000-5000 yards a day currently and used to race mountain bikes in Sport class when I was living closer to real mountains.

Ohai - which tri are you doing this weekend? I’ll be at the St Louis 5150 in Innsbrook doing the olympic. 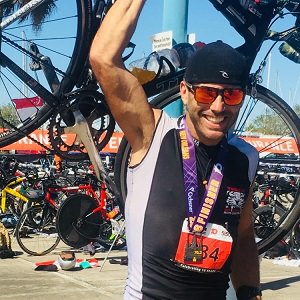