I was reading an article on potential non-central bank stimulus strategies, the fiscal policy of a “helicopter drop” was mentioned. I did some brief reading on this policy but I wanted to make sure I was understanding it properly. A helicopter drop is a blunt “printing of money”, likely distributed through tax cuts. It may have a time limit on it encouraging people to spend rather than save. It sounds like QE, but differs since it is not reversable. (With QE, the bonds can be sold back into circulation and the “printed money” taken back out of circulation.) My main area of discontent is the phrase “printing money”. With QE, this a misleading phrase. Money is not “printed” but pulled from the future temporary as debt is being purchased. With a helicopter drop is money literally being printed? So, with QE, new money is not being actually created, but with a helicopter drop it is, yes? Am I missing anything in my understanding? Any points of view to offer on QE vs. Helicopter drop

All of it is considered debt. Look at any cash, it’s a Federal Reserve Note. QE is seen as printing money because no one honestly thinks the debt will be repaid without just rolling it over into newly issued debt. The fiscal policy version, instead of monetary poilcy driven, is generally more targeted in terms of tax credits or pure cash stimulus like was done in 2009 ish. It’s more of a stimulus because they’re not actually lowering taxes, they’re just providing a temporary effective decrease.

Actual physical cash is probably the same either way, since most is done electronically, but I have not looked up any minting/printing stats. The main issue with either method is the increasing supply of money. I’d much rather prefer tax cuts and less government spending, since it’s pretty obvious the private sector is much more productive and efficient. 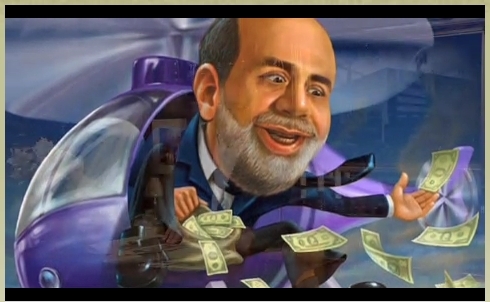 Agreed. This whole “helicopter drop” business is buzzwords. Inject massive increases in MZM money supply, make sure money velocity is depressed to prevent inflationary effects, and you are in business on a successful helicopter drop.

The helicopter Ben image is about just getting cash into the hands of people willing to spend it. It’s basically a Keynsian idea using monetary policy instead of fiscal policy.

The image is cash of any sort and therefore could be printing money. It could also be credit creation, which is the way it would be done in practice.

The key idea of the image is that it doesn’t really matter who gets the spending power, hence the helicopter. This is because the fear is that money is not circulating in the economy because everyone is too afraid to spend because their liquidity reserves (money that isn’t immediately needed to cover a debt or payment) are too tight. However, there is an assumption that the added spending power is going to be distributed more or less evenly across the economy. It might end up being a lumpy distribution, but it wouldn’t be concentrated in just one place.

In physics, this would basically be a phase transition issue… money is more or less “frozen” because it is too risky to spend anything, so adding some money gets things moving. Although this can sound irresponsible (and in the wrong context would be irresponsible), the idea is that if money doesn’t get circulating in the economy, then there is going to be more layoffs because businesses have no revenue, layoffs lead to even less purchasing power, meaning more bankruptcies, meaning more forced selling, which is going to feed into a viscious circle, devaluing things further. Therefore, the idea is that the risk of inflation is less worrying than the risk of this continued deflation, and monetary injections are thought to be justified.

This policy did appear to help, but the big problem in practice was that helicopter money was done through credit creation and large banks were the first in line at the feeding trough. As a result, banks took the helicopter money, invested it in government bonds and lived off the (small but real) interest spread. The money never made it back into the real economy because the banks just took the credit and sat on it, except to the extent that the banks’ application of those funds to US Treasuries it helped finance fiscal things like the Earned Income Credit. So the challenge was with the so-called “Transmission Mechanism” (how to get the money out into the economy so it didn’t just sit in the banks).

In the beginning, the banks were at risk of going under, so the transmission mechanism issue was not as important - banks needed to function too. But once the banks had been more or less stabilized, there were problems getting the money to consumers in the economy, which is one reason the recovery was relatively anaemic in GDP employment terms. About 3 or 4 years into the program, Bernanke was basically begging Congress to engage in fiscal expansion, but they weren’t having none of that, so the Fed tried things like Operation Twist, buying stuff on the long end of the yield curve, QE 3, but they knew that this wasn’t going to be as effective as they hoped. In the absence of fiscal policy, however, it’s not clear what else they could do.

The term definitely did not start with Ben. Here’s a great book about the history of currency. Covers helicopter drops. Actually, think I’m going to read it again. It’s been a while. Just put it on hold at the local library. http://www.amazon.com/Money-Mischief-Episodes-Monetary-History/dp/015661930X

Thanks bchad for one of your classic answers with miles of scope. Thanks for the book tip, ghibli!

The problem is the money got stuck in the trees and never reached the middle class.

As a result, banks took the helicopter money, invested it in government bonds and lived off the (small but real) interest spread. The money never made it back into the real economy because the banks just took the credit and sat on it

My two cents to this comment would be that:

In general of course the issue of effective transmission mechanisms of monetary and fiscal policy was central to the whole operation.

^^perhaps the public would resent this sort of stimulus less because it would be disguised as simply “tax cut”. We could get the cash our there without the stigma of a sinking economy. But they have to come up with a better name than helicopter money… because that doesn’t sound like a panic driven last resort at all :-/

Let’s just let Japan F up their economy before we even think about doing this (more than we already are). I cannot believe economists actually believe some of this garbage.

Here’s how you successfully execute:

not printed money is national debt.

both have doubled in past 10yrs

“helicopter money” is a far more direct way to getting consumers to spend spend spend! Ray Dalio provides my favourite explination of this strategy

lol - I remember an article depicting fed chair doing this in a magazine. it was hilarious.