Go short Canada on Monday boys, the Liberals will be back in town (unfortunately): 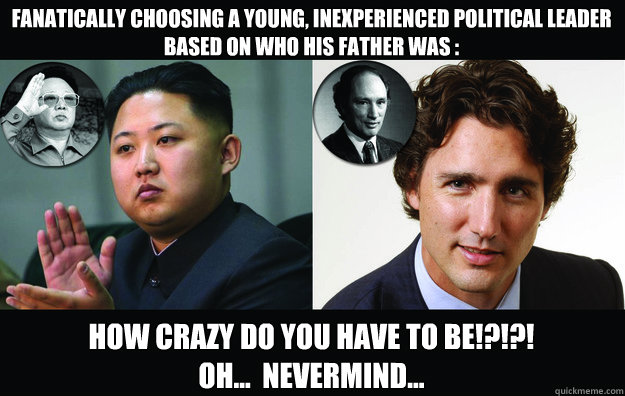 Oh Canada. What are you thinking… honearly, this is on the Conservatives for completely boggling a campaign against an absolute lightweight, but so be it.

^ I’ll go out on a limb and say the Canadian election is more relevant than 99% of the posts from the Indian brigade here. Plus I bet alot of Americans own Canadian stocks that would be impacted, like the banks, TransCanada, Suncor, etc. This is a finance forum after all.

Harper has been pretty awful, but the alternatives being a big government liberal or a radical labour socialist doesn’t really offer up other choices.

And for the record, the most fiscally conservative government in Canada’s modern day history were led by Chretien/Martin. Mulroney and Harper were disasters when it came to balancing a budget. We have been out of a recession for 6 years now.

Anyone that follows the oil and gas industry should care. A few midsize E&P, midstream and services companies there in Alberta are very relevant to my job. I was actually hoping geo would chime in on this b/c he seems politically aware and knows the oil industry well. Theres also a lot of Canadians on this board with opinions Id like to hear. I’m all ears if you’re going to discuss

^ The only real pro-oil and gas party is the Conservatives. The Liberals view oil and gas as a non-priority cash cow for their social agenda (so more taxes, carbon taxes, etc.), and the NDP more or less oppose development. A surprise conservative win would be good for your oil and gas interests.

And for the record, the most fiscally conservative government in Canada’s modern day history were led by Chretien/Martin. Mulroney and Harper were disasters when it came to balancing a budget. We have been out of a recession for 6 years now.

Despite Trudeau’s Québec heritage, I think you’re seeing a Liberal party more in the mould of Kathleen Wynne than Paul Martin or Chretien. This is not the pro-business party of the Liberal past. This is a going to be a party pursuing a social agenda via the economy which never turns out well. Ontario manufacturing has been decimated at the hands of Wynne’s energy policy, and now Trudeau views a national rollout of this as a positive. I actually warmed a bit to Trudeau through the campaign and on the face Liberal policies are pretty reasonable. But there is an underlying “big government is here to fix your problems” through “green investment” and all that nonsense which just makes me sick. I don’t want Canada to face the energy situation that Ontario has faced. Yeah, in Québec you’re golden because you have abundant hydro, but the rest of us could be really screwed.

Does the world even know that Canada has elections?

Does the world even care?

How can I come to canada?

My phone is ringing off the hook with auto dialers reminding me about the election tomorrow, give a ride to your neighbours, do you need a ride??, our candidate cares about your future… Grrrrrrrrr!!!.. And some research firm wants my opinion on something - the day before the election!!! What a coinky-dink!!

the only real beef i have with the liberals is their environmental policies, which are based on fuzzy math and fuzzy consensus. as a fiscal conservative, i’m totally in favour of more progressive tax rates (lower bottom end, higher top end) as most studies these days conclude that income equality is reducing economic growth. even as a fiscal conservative, i’m in favour of deficit spending considering we haven’t grown at all for six months and have just barely grown in the past 18 months. considering our very low debt/gdp ratio and degree of economic weakness relative to the rest of the world, this isn’t a bad way to spend government money (far better than some daycare plan and far better than more harper policies that benefit the top echilon the most). as a social liberal, with trudeau at least we get back to Canadian humanist values and move away from harper’s vision of an American approach to social/humanist issues.

in trudeau’s platform, literally every policy is supported by consensus and scientific research. this is very different from harper’s policies which are rooted solely in ideology. i think it is much more Canadian to be run by consensus than by ideology.

this is why my first non-Conservative vote will be today and will be for trudeau.

^ Not true my friend. His income equality outcry is not based on the facts. Income inequality in Canada has not risen under Harper, in fact it has improved. The exact opposite of Obama. The biggest growth in Canadian inequality came under Chretien. Also: don’t call economics “scientific research.” You can’t have scientific backing behind fiscal or economic policies.

the gini is effectively at the same level since the beginning of his tenure and was at higher levels for much of his tenure. as a result of the gini sticking around its ~90 year high for 15 years, wealth inequality is at a near century high as well. harper’s policies generally are made to seem populist (thus why he was able to stay in power for so long) but tend to benefit the wealthy the most. in order to boost economic growth and maintain social cohesion, the gini should be brought down. the income equality outcry is based on the consensus view of many non-classical economists and makes obvious sense. tax stagnant money that earns nothing and give it to those who will spend it today. mortgaging the rich’s future (of which they have excess) and give to today’s needy, boosting today’s economic growth at the expense of infinite wealth accumulation.

i did say consensus AND scientific research. global consensus backs trudeau not harper.

taxing the rich to spend today makes the most sense in history as we are basically in an 8 year global recession, and Canada is now in the process of a potential major shift in our economy that would be aided with social infrastructure spending, yet top marginal rates in North America hover around the 40-50% compared to 80-90% in the 1930-1980 period. those who say a marginal tax rate over 50% has some undue consequences clearly has no knowledge of tax history.

I’ve never voted before but was curious about which party are aligned with my views. 2 out of 3 says Liberal and the other one says NDP. I want to vote but I also like the TFSA…

Well…its better than NDP. Although I would prefer Conservative (not necessarily Harper), I’m glad to see NDP lose so much traction lately. I will be interested to see how AB votes considering our recent election.

Well…its better than NDP. Although I would prefer Conservative (not necessarily Harper), I’m glad to see NDP lose so much traction lately. I will be interested to see how AB votes considering our recent election.

That was my first thought too. I don’t even know if I’m eligible to vote in Canadian elections. I always checked the box on my tax return to update my info in the elections register, but I never get anything from Elections Canada.

It is better than the NDP… That I agree with. Disappointing night.