FARGO, N.D. (AP) — A class of sixth-graders from North Dakota has schooled some of the best college business students in the country on the stock market.

It started as a competition between the regular and advanced math classes at Fargo’s Oak Grove Lutheran School, where Dave Carlson was teaching his students about handling money through two online investment companies. Unbeknownst to the middle school investors, one of the companies was at that time holding a university challenge that offered a $5,000 first prize to the investment club with the most profitable basket of stocks.

While Virginia-based McIntire Investment Institute won that contest with an 18.5 percent return, Carlson’s regular math class yielded a nearly 22 percent gain and trounced all the university clubs on a return-since-creation basis.

“When we found out we had beat the colleges, everybody was really loud and yelling,” said Jacob Lang, one of 13 students in the Oak Grove class. “It was really cool.”

Carlson’s classes started the project using an app through BreadVault, a Fargo company that makes online money management tools designed for families with children. BreadVault owner Ross Almlie referred them to Motif Investing, a San Mateo, Calif.-based company that enables customers to buy baskets of stocks that are named motifs. 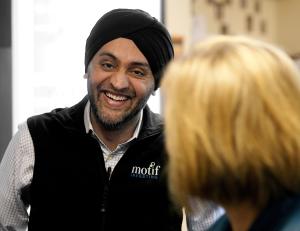 The class results so impressed Motif Investing founder Hardeep Walia that he made his first trip to North Dakota this month to visit the students.

“You guys crushed it,” he told the young investors who mopped up with stocks like Netflix, Starbucks, Under Armour, Facebook, Amazon, Google and Priceline.com.

Motif charges a flat fee of $9.95 to buy collections of up to 30 stocks based on an investment idea. Walia’s wife, for instance, has a motif called “No Glass Ceilings,” which is based on stocks of companies led by female executives. Other examples, apropos to North Dakota, are “Rising Food Prices,” featuring products from the farm to the supermarket, and “Frack Attack,” focusing on the oil and gas industry.

If someone else buys a customer’s motif, the customer makes a royalty. Walia himself snatched up the Oak Grove motif.

“It made me a lot of money,” he told the class. 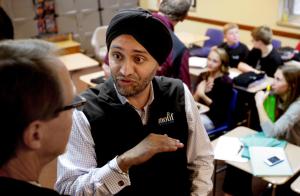 The motif assembled by Carlson’s Math Minions centered on companies the students knew about with good track records. They did research and in most cases made solid investment decisions. Eloise Baker said she decided to buy Under Armour, which makes sportswear and athletic gear, based mainly on the fact that Christmas and the Olympics were around the corner. Sure enough, the stock shot up. The company just last week approved a 2-for-1 split.

“That’s what I wanted for Christmas. I thought that’s what a lot of other kids wanted,” she said of Under Armour clothing. “I also found it to be a little bit cheaper than Nike, so I thought it was a good buy.”

While each student was allowed to make one stock switch, Carlson encouraged them to be patient with their selections. He believed the class came out ahead of the university challenge in part because the college students were looking for a quick buck.

Walia said he was “blown away” with the level of thinking by the Oak Grove investors.

I missed out, my school never did shiit like this. My Econ teacher could barely explain Aggregate demand coherently.

why is this news?

The UK Observer ran a contest last year, A bunch of investment managers invested in the best stocks they could find, while a cat named Orlando randomly chose stocks from a list. The cat won.

While the professionals used their decades of investment knowledge and traditional stock-picking methods, the cat selected stocks by throwing his favourite toy mouse on a grid of numbers allocated to different companies.

The challenge raised the question of whether the professionals, with their decades of knowledge, could outperform novice students of finance — or whether a random selection of stocks chosen by Orlando could perform just as well as experienced investors.

^ur a funny cat

If there are stories about kids successfully picking stocks, I think we all know what lays ahead.

Can I pay the cat’s management fee in cheezeburgers?

But, was this cat a CFA?

The Cat Fanciers’ Association is a non-profit organization founded in 1906, after breaking ties with the American Cat Association. The Association licensed its first cat shows in 1906; one show was held in Buffalo, New York and another show was held in Detroit, Michigan. CFA’s first Annual Business Meeting was held in 1907 at Madison Square Garden. In 1906, CFA published the first Stud Book and Register in the Cat Journal. In 1909, Volume I of the Stud Book was published in book form. The Stud Book and Register served as CFA’s first published records of cat breeding and lineage as it began a tradition of providing a much-needed service to the cat fancy. On September 18, 1919, Articles of Incorporation were filed in New York State. By 1920, CFA was on its way to becoming the largest registry of pedigreed cats that it is today.

Dart-throwing monkeys have been beating professional money managers for years.

What lesson is learned by these contests? Next thing you know these kids will be gambling away their parent’s 401k. I’m guessing that the amount of chance involved is not emphasized and the winners think they have some sort of investment accumen. Dangerous and irresponsible.

Where can I get this beenie?

This article is 85% an advertisement for Motif Investments…

Yahoo! News is running this story and it includes a class picture. Those kids better do well in the stock market if they ever plan on getting a little somthin’ somethin’

Anyone has a one sentence summary?

Cliffnotes have to be imposed soon.

Wtf is an obviously very gifted guy like Hardeep Walia doing with this silly venture?

One of the most prestigious cat shows: CFA IAMS Cat Championship 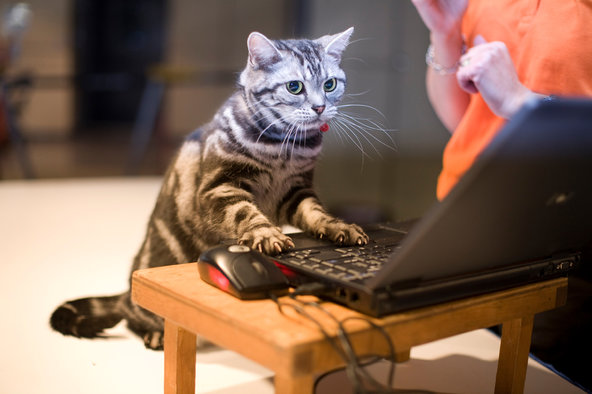 next year: adding a stock challenge to determine which cat has what it takes to beat professional money managers !