I’m not a trump fan… but, I’d rather support a rock that’s been pissed on by a herd of cows in the hot summer sun over Hillary Clinton. If anything, she’s an American disgrace. Her ignorant rhetoric changes daily depending on what’s popular on social media that given day. She’s all about that “let’s cower to the 0.03% of people who are potentially offended by something” mentality when it has nothing to do with 99.97% of the country. (yes, my numbers are likely exaggerated, though, probably not by much).

The only issue Trump has is with ILLEGAL immigrants (emphasis on the word illegal) and countries that are terrorist breeding grounds. He may sound extreme to many, but, I also believe a lot of his statements are taken way out of context.

What I do like about Trump… he gives zero F%CK$ about political correctness, and it’s a breath of fresh air… though, that’s about all i like about him.

America is already in the midst of another Civil War… you’re just not as exposed to it as we are.

We appreciate your position, buy you need not concern yourself with American politics.

Trump may be a racist, but Hillary is as genuine and trustworthy as a used car salesperson.

And to be fair, Canada just elected Trudeau, probably mostly because he’s the son of a well regarded former PM and because the other two options were considered even worse.

In other news… Hill-dawg kind of reminds me of Dr. Evil in this photo based on her attire… 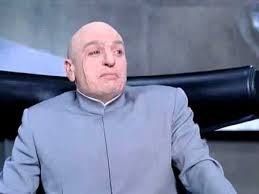 He suggested this particular judge may be biased and that bias may be rooted in his heritage. He also said a Muslim judge could possibly be biased against him because of the proposed moratorium. I must have missed where he said all judges of Mexican heritage or of Muslim religion cannot be fair. This kind of bias happens every day. Blacks have successfully complained about white juries not being fair. Rightfully so in a lot of cases. Is this lady a racist too or just a realist? http://mobile.nytimes.com/2009/05/15/us/15judge.html Why should Trump not be allowed to voice his concerns? How does that make him a racist? Staying quiet would be PC. He may be wrong, but certainly nothing impossible about his suggestions.

This is one wacky election I’ll admit. It’s basically choosing the lesser of evils. The judge thing is not racist at all. Let’s all stop pretending judges aren’t biased human beings just like us. Sotomeyer herself literally said she’s where she is due to affirmative action, and you don’t think that’ll influence all her judgements? The legal system literally has a procedure in place where a judge can be “recused” because he or she had a personal bias influencing their judgement on this case. This judge has clear ties to a group super anti trump on illegal immigration.

^Never understood those that are so confident about the character of another man, especially a stranger. https://youtu.be/dahqHQ8qkjw https://youtu.be/lxaKUo5naoY What have you done to advance the relations of those with genetic lineage from differentparts of the world? You seem to be comfortable throwing around stereotypes, yet you call out others.

Did I hear that she slept with him?

but Trump > Hillary… just because… with Hillary, you know exactly what you are going to get… which is the status quo. Not to mention, Hillary would actually be in jail at this point if her last name wasn’t Clinton.

I don’t think many Americans can afford another 4 years of status quo. Stagnant wages, trillions of dollars of debt, bailing out of wall street (remember… Hillary is bought and paid for by wall street). Many Americans, and Canadian alike have been experience worse and worse living standards… so yes… Trump might be an awful choice… but sometimes… you have to roll the dice.

Besides, I don’t think Trump can really screw up THAT poorly given that there are checks and balances in place between the US congress and the senate.

Can a Trump supporter explain why someone of Mexican origin can’t do his job? In the past he used coded language (oh he’s only against illegal immigrants, he’s not racist) giving him plausible deniability. This is the first time he’s been openly racist and I think it’s going to hurt him. Not that he was going to win anyway.

Can a Trump supporter explain why someone of Mexican origin can’t do his job?

Trump is obviously wrong, Mexicans can do their job just fine. A joke somebody told me when I lived in San Antonio alluding to their work ethic is “they’re Mexi-cans, not Mexi-can’ts!”

Sigh…I know it’s a really bad and slightly inappropriate joke. But F it. To be fair it was told to me by a white guy from West Texas.

wow that is shocking stuff.

I keep waiting for him to move closer to the center as this election evolves, but that does not seem to be happening!

cant wait for the debates. should be one of the great races of all time…

You’re trolling at this point. Kudos on the successful troll attempt… now, get back to your CPA studies

cant wait for the debates. should be one of the great races of all time…

The debate I was looking forward to was Trump vs Sanders. i don’t blame Trump for backing out as he had nothing to gain but it would have been entertaining nonetheless.