So whoever bought yesterday’s Powerball is worth $760m. After taxes, I figure that they’re probably walking away with $420m.

hookers and coke my friend

well, more money causes more problems and the scripture says its harder to stick a camel with a needle than it is to be rich and get into heaven, so i would probably give it to my most hated enemy

. i truly pity the satanic winners

Two women at the same time.

Two women at the same time.

$380m, wait for the next recession in 1-3 years and buy growth stocks/etfs (75%) and bonds (25%) at the bottom. $30m, buy that island with the mountain ive always wanted, hollow that sucker out, stick in bioengineering labs and a nice port that goes underground, a nice climbing gym, get an observatory at the top of the mountain, and a great kitchen and workout facility. $5m emergency fund. $5m, funding until the recession comes.

Besides 2 chicks at the same time? Nothing. I would relax, I would sit on my ass all day, I would do nothing. 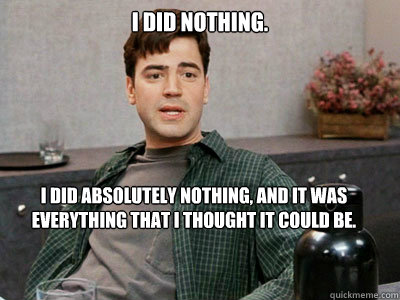 the annual payments on the other hand. will be roughly 700/30 = or $23m/year. the payout will increase by 5% per year. net of taxes using top assumptions, this’ll be an annual payment of $13, increasing by 1.05 each year.

for non finance guys i would tell them to take the annual payment, because it reduces risk.

for finance guys, i would tell them to take lump sum. cuz u can prolly earn more than 5%/year.

I’ll withdraw 3% to 5%/year or $7.5m to $13m as my annual budget, split this up on a monthly basis, then turn up everyday. i’ll prolly never get married and travel a lot while banging a lot of chicks worldwide.

Buy a low to middle market NBA team. Then come off the bench to launch 3s from time to time.

Pre-tax lump sum is actually $480.5MM, so figure about $288MM after-tax. Still adequate to fund a comfy retirement though. First thing would be to quit my job and then line up some kick-ass tax attorneys and accountants to set up the appropriate LLC’s and trusts. We have enough savings that we can go a year or so without paychecks, so we would lay low and claim the reward after all the hype has died down. I don’t want to move my kids away from their friends and we really like our house, so we probably wouldn’t move. I wouldn’t want my name on it anymore though, so would probably lend money to one of my buddies so he could buy it off of me and 6 months or a year later have one of my trusts buy it back. Having it go directly from me to a trust would be too obvious. Probably buy a vacation house someplace warm. I like our existing cars, but would probably upgrade both. After that, play golf and travel when the kids are off from school. Probably put a couple million aside to play angel investor.

have a litter of puppies and send them all to college

ll prolly never get married and travel a lot while banging a lot of chicks worldwide.

You would lose half right away.

After I finish my studies spend 50 million on dinners with extremely smart people, and think about how to start a venture of my own. I would probably kill myself if I have nothing to fight for so I would somehow stop myself from having all the money at one time.

most of you guys talk about partying and girls…you guys should come out and live in NYC for 1 year. Just do it before you get married. You will not regret.

Buy a nicer chair for my desk.